The history of Preston is intimately linked with that of the Dinsley estate and the exotic Knights Templar.

The order of the Poor Knights of the Temple of Solomon was set up in Europe in the twelfth century to protect Jerusalem-bound Christian pilgrims from attacks by Moslems. They were supported by The Popes and the Church and received large gifts of money and lands.

In 1142, King Stephen gave the Templars two mills and uncultivated land in Dinsley – the site of present-day Preston. Here they built their Preceptory and ran a farm. They also had a house and shop in Hitchin market. 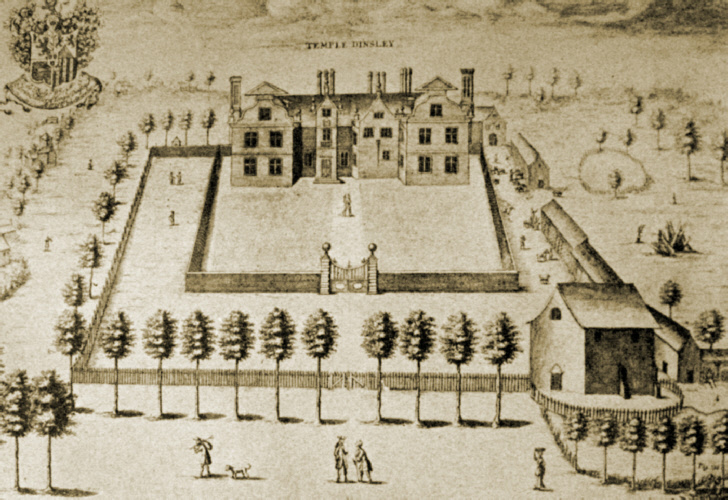 An engraving of Temple Dinsley (following its rebuilding by Sir Edwin Sadleir) in Chauncy’s, ‘History of Hitchin’.

The name Preston implies the site was once the priest’s farm. The present-day village is part of the former Temple Dinsley estate. The site of the deserted medieval village of Dinsley falls within the present boundaries of this attractive Hertfordshire village.

It is believed that nearby Wain Wood could have been inhabited by pagans. Some experts believe ‘wain’ is derived from a word meaning the valley of heathen worshippers – while others believe it means the wain or wagon-way. In the seventeenth century, the hollow in the wood now known as Bunyan’s Dell was used for services to commemorate John Bunyan’s visits to the area.

Local legend says that plague victims were buried at Waley Close, only a short distance from Dead Woman’s Lane.

During the nineteenth century, the Dartons, although remaining attached to the village, often rented the house to the gentry. Thomas Harwood Darton built a school in 1849 to replace the old dames school. It was Thomas’ son, William, who sold what was left of the estate in 1873. The mansion, Home Farm and some cottages were bought for £19,000 by Henry Maclean Pryor of Clifton in Bedfordshire.

Little is left of the people who lived at the estate. The grave cover of a monk from the Preceptory is in Preston church and there is a stone effigy of a medieval knight which came from Temple Dinsley in Hitchin church.

The new owner was Benedict Ithell, deputy treasurer of the Royal Chelsea Hospital who bought the manor in 1712. He immediately began to restore the manor house and the estate cottages. Ithell became Sheriff of Hertfordshire in 1727, his status in the county was assured, and was later made trustee of Hitchin Grammar School.

His daughter, Martha, inherited Temple Dinsley and on her death in 1767, she willed the estate to Thomas Harwood – ‘Her faithful friend and steward’. This caused an uproar. It was said that Harwood was only a footman and the son of a groom in London. A cousin of Martha Ithell, Benedict Clarke of London, claimed the property on the grounds that Martha was of unsound mind but he lost the case. Some suggested that Joseph Darton, who inherited Temple Dinsley from Thomas Harwood, was his son by a secret marriage with Martha Ithell – or that he was a nephew or cousin.

The Pope gave the land to the Knights of the Hospital of St John of Jerusalem, but by the time they had taken possession, the estate had been considerably depleted. The Hospitallers leased out the Preceptory. One tenant was John Docwra who died in 1531 and asked to be buried at Temple Dinsley or Hitchin parish church. Besides leaving goods and money to his family and friends, he left money for the upkeep of his bastard daughter, Frances, until she was of age and married.

In 1542, the Hospitallers and other religious houses were suppressed by King Henry VIII and the Temple Dinsley estate went to Sir Ralph Sadleir for his services to the crown.

After the reformation, the estate had a chequered history. Sir Ralph Sadleir paid £843. 2s 6d for it in 1541 and it remained in the Sadleir family until 1690 when Sir Edwin Sadleir was obliged to apply for an Act of Parliament to sell the estate to pay his debts.

In 1185, the Master of the London Temple ordered an enquiry into the Knights Templar estates in England. For the first time Preston was named in a document. Bernard Bailiol, Lord of the Manor of Hitchin, was mentioned as benefactor and about 50 people, mainly agricultural workers, were listed as holding land and cottages on the estate. There was also a carpenter, a forester, a smith, a cloth-comber and a blood-letter – the medieval equivalent of a doctor. There was no evidence of military knights living at Temple Dinsley. From time to time, meetings of the order were held there to discuss financial business.

By the beginning of the fourteenth century, the Knights Templar were surrounded by enemies, jealous of their wealth and critical of their prestige. The order was suppressed in 1308 and six brothers were imprisoned in Hertford Castle.