Wain Wood was a lucrative source of income for its owners. The accounts of the woodward or bailiff, John Merritt, from 1739 to 1767 have survived. These not only describe how the wood was used but also list the villagers (including some widows) who cut it. Some travelled from Hitchin and Gosmore.

Every year between five and six acres of wood were rented to local people. Each was allocated (on a rotational basis) a small area of woodland  from which they cut hornbeam. This was used for their own firewood or sold around the district. A man could make this his full-time occupation during wintertime. (Here is a link to a list of the people who rented small portions of Wain Wood during this period.)

In addition, between 3,300 and 9,000 ‘rads’ were produced annually at Wain Wood. “Rads’ were probably  bundles of faggots, light branches and shoots which were cut by estate workers and sold in lots of a thousand. Another source of revenue was the 35 to 102 yards of bark which was sold to tanners each year in the mid-1700s.

From these three items the wood brought in an annual revenue of between £33 and £55. The demand for firewood, however, was affected by the coming of the railway in the nineteenth century which introduced affordable coal to the neighbourhood. Then, although the rental of wooded areas for coppicing continued, the main attraction of woodland such as Wain Wood was its potential for shooting - the woodward was superseded by the gamekeeper.

‘At Wain Wood, in Hitchin parish, there was no preaching shed. The cottage is still there with its pleasant ingle-nook in which Bunyan smoked many a peaceful pipe. But it was in the woodland dell which is still known as Bunyan’s Dell, under the trees and under the stars, that he preached to his “gathered church” which numbered sometimes over a thousand souls. If it drenched with rain, there were four devoted women ever at hand to hold an apron over his bare head as he preached.’

For many years anniversary services were held at the dell but this custom had  lapsed long before the 1880s. However, the large attendances  in 1882 at the newly-built Bunyan’s chapel at Preston fostered the optimistic hope that the annual service at the dell might be revived.

In 1928, there was an enactment of Bunyan’s original sermon an Bunyan’s Dell from which these photographs were taken. 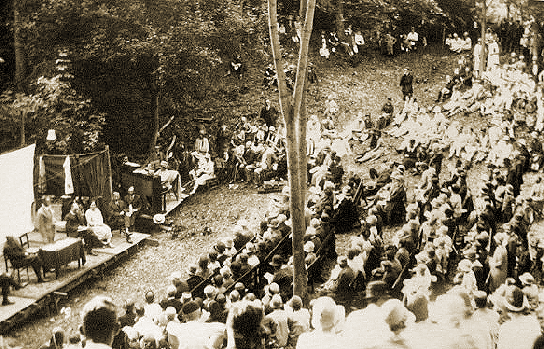 Bunyan’s Cottage from a drawing by Samuel Lucas circa 1860 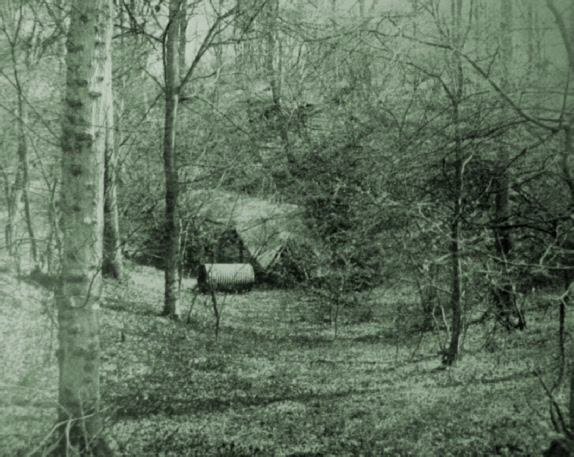 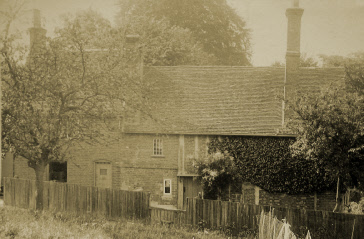 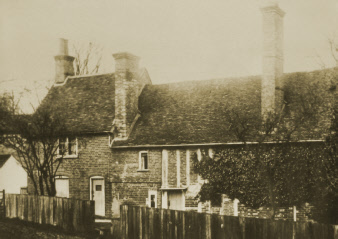 Bunyan’s Cottage was traditionally the lair of the Wain Wood gamekeepers for at least a 100 years from 1851. The following is a list of its known occupants:

Gamekeeper and father of Frank, below

I remember walking through the wood in about 1960. There were lines of dead birds and small animals which had been strung out between trees by Dick Middleditch, the gamekeeper. When I walked through the wood recently, I recalled that it was a short-cut from the bottom of Preston Hill to Chequers Lane as it lopped-off the corner by ‘The Chequers’.

The walk starts near the bottom of Preston Hill (A on the map above) and concludes at the stile off Chequers Lane. 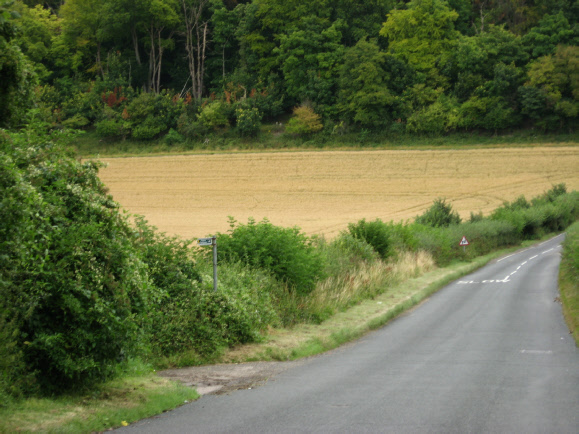 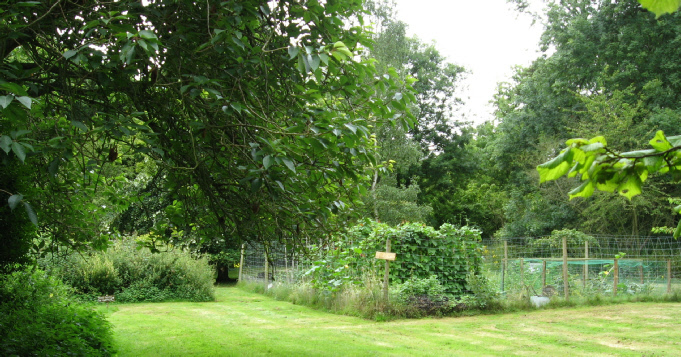 After following the path to the right at a fork (the left track leads to Bunyan’s Cottage),

the right of way is clearly marked 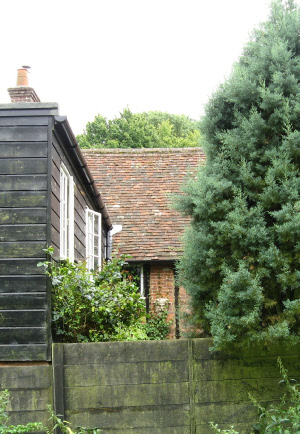 A glimpse of Bunyan’s Cottage from the footpath. Note the ‘green man’ on the wall

Left and right: the way through the woods 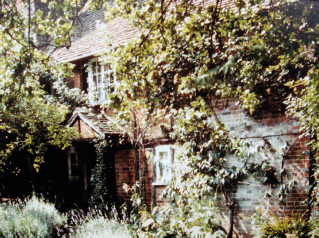 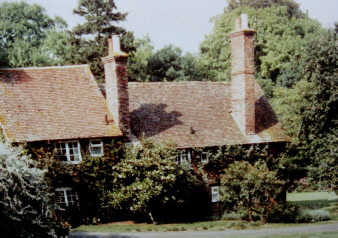 Above: A montage showing Bunyan’s Dell 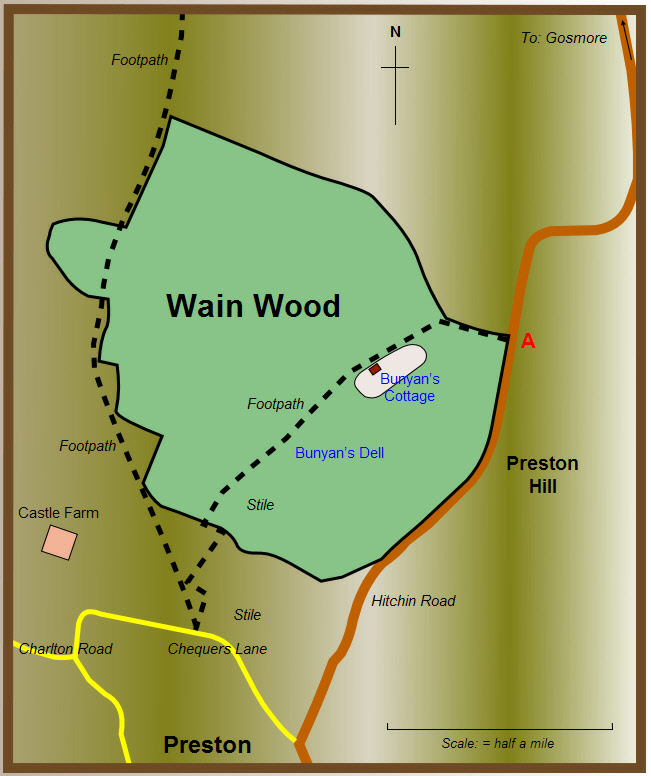 Wain Wood, to the north of Preston, was a part of the immense forest that once stretched from Hitchin to Hatfield. Because of its age and richness of flora and fauna, it is designated as a Site of Special Scientific Interest. In the eighteenth and nineteenth centuries, Wain Wood was owned by the Radcliffe family.

The name of the wood, Wain, has prompted speculation that it was inhabited by pagans. Wain may derived from a word meaning  valley of heathen worshippers. An alternative (and far less intriguing) connotation is that the name means a wain or wagon-way.

In the nineteenth century, Wain Wood lay in the parish of Ippollitts and was almost a mile wide and long. It was dominated by oak trees and hornbeam and had a coniferous plantation of pine and larch. Beneath the canopy of trees, the wood was celebrated for its spring-time display of bluebells - wild cherries and primroses also carpeted the ground.

Butterflies (such as the speckled wood butterfly) and moths flitted about the wood in profusion while adders and lizards made their homes in the undergrowth of the forest floor.

Wain Wood was a favourite haunt of Hitchin Quaker families because of its abundant natural surroundings. There they ‘botanized, bird-watched, sketched and chattered’. In the early 1800s, Joseph Whiting wrote in his diary, ‘Good Friday. A beautiful day. Walked with sister Ellen and Edith to Wain Wood. Took our dinners with us. Before entering the wood, met some boys with their hands full of primroses. Edith was afraid they had gathered them all but was soon greatly surprised to see parts of the wood almost covered with them’.

On 5 March 1885, one of the wood’s occupants was rudely disturbed - ‘a fine full-grown badger was caught in the middle of Wain Wood, Preston. Six men were employed from ten am to five pm in digging it out, it being at a depth of between  five and six feet from the surface. A number of people assembled to witness the operation and when the badger was reached, a man named Collins drew it out by its tail and held it up to the spectators’.