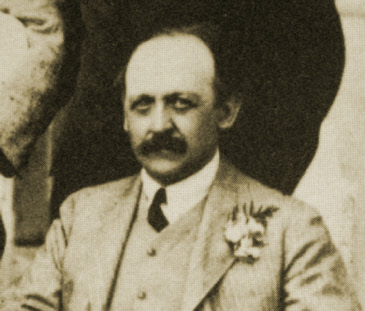 Sir Edwin Lutyens was an internationally-renowned architect who left his stamp on Preston by designing more than a dozen buildings in the vicinity. This is the story of his life and his involvement with a small Hertfordshire village.

Navigate from here using links below to photographs and comments

re: Luytens’- designed houses at Preston

Hill End and nearby cottages

‘The greatest artist in building whom Britain has produced’ – thus, Sir Edwin Lutyens has been lauded. Between 1908 and 1920, he designed several properties around Preston ranging from estate workers’ cottages to Temple Dinsley’s extensive additions.

Edwin Landseer Lutyens was born on 29 March 1869 at Onslow Square, London. He was one of fourteen children and was known among his friends simply as ‘Ned’.

His daughter, Mary, asserts that her family descended from a Dutchman called Lutkens who came to England and became a naturalised British subject, changing his name in the process.

Edwin’s father, Charles, held a commission in the 20th Regiment of Foot and was a talented water colourist. In 1852, he married an Irish girl, Mary Gallway, in Montreal, Canada. Five years later, Charles retired from the army with the rank of Captain to paint professionally. He studied with Sir Edwin Landseer who was to be Ned’s godfather and the inspiration for his name. Charles exhibited at the Royal Academy every year and, with Edwin Landseer, designed the lions of Trafalgar Square.

As a child, Edwin contracted rheumatic fever which influenced his development: ‘Any talent....was due to a long illness which afforded me time to think’ and which taught him to ‘use his eyes instead of his feet’. He had a talent for drawing – ‘It’s easy, I just think and then I draw a line around my think’.

As a teenager, he roamed the West Surrey countryside absorbing the styles of old buildings and the methods of construction of new homes – how drains were dug; the laying of foundations; how roofs were tiled and the erecting of chimney stacks.

In 1885, Edwin was sent to South Kensington School for Art. Four years later he was introduced to Gertude Jekyll, doyen of English garden designers, a meeting which was to result in several architectural commissions. Lutyens affectionately referred to Jekyll (who was twenty-six years his senior) as ‘Aunt Bumps – the Mother of All Bulbs’ or ‘Mab’. Together, they toured the countryside in Jekyll’s pony cart observing farms and houses and discussing their structures.

When he was twenty years old, Lutyens opened his own office. It was the age of the grand country house where guests were entertained from Saturday until Monday and he established a reputation for designing picturesque houses for the nouveau riche and country cottages. His first commission was to plan Jekyll’s own home, Munstead Wood in Godalming, Surrey (1896).

Jekyll introduced Lutyens to those for whom she designed gardens and he planned architectural features for homes and gardens. The ultimate kudos for many wealthy families was a ‘Lutyens house’ with a ‘Jekyll garden’ - an ‘Edwardian catch-word denoting excellence, something fabulous in both scale and detail’.  Perhaps their best-known collaboration is at Hestercombe in Somerset which is still a revered shrine for admiring gardeners.

When studying for a Gardening qualification, I was astonished to read of a Lutyens/Jekyll project in my father’s old village. Jane Brown in Gardens of a Golden Afternoon (sub-titled, The Story of a Partnership: Edwin Lutyens and Gertrude Jekyll) mentions ‘another good brick garden with elaborate terraces’ at Temple Dinsley and includes a photograph of the garden house. She lists ‘the rose garden with its elegant brickwork’ as one of only twenty-four ‘saveable’ and ‘hallowed’ examples of the duo’s work.

This is how Lutyens (described as the ‘leading architect of country houses’ because of a ‘brilliant sequence of houses built for rich and fastidious Edwardians’) became involved with Preston: he had designed additions to Abbotswood at Stow-on-the-Wold, the home of country gentleman, Mark Fenwick to whom he had been introduced by Jekyll. Fenwick in turn recommended Lutyens to his cousin, H. G. Fenwick, ‘Bertie’, who had purchased Temple Dinsley. H.G.F. commissioned additions to the Queen Ann mansion and built the estate cottages at Chequers Lane, Preston. He also had Hill End, Langley built for his wife together with a cluster of nearby cottages. Minsden Farm, now known as Ladygrove, Kiln Wood Cottage and 1 & 2 Hitchwood Cottages were also commissioned during this period. Thus, in less than twelve years, a collection of buildings, whether mansions or cottages, was created around Preston village giving a uniform and pleasing character to the district.

Lutyens’ work evolved, his reputation grew and his designs became more grandiose: for twenty years he planned the lay-out of New Delhi, India where he also designed the Viceroy’s house – all in a neo-classical style. Lutyens was knighted in 1918. Following the Great War, he devised the Cenataph in London and the Memorial of the Missing of the Somme at Thiepval. He was also commissioned to design several commercial buildings in London and the British Embassy in Washington, USA.

After becoming president of the Royal Academy in 1938, Lutyens died on New Year’s Day, 1944 and his ashes were interred at St Paul’s Cathedral – an apt choice as he referred to his ‘Wrennaisance’ style at the time he designed the additions to Temple Dinsley.

Lutyens had the self-trained ability to memorize a building’s colour, texture and materials. A new commission would take shape in his mind’s eye. On site, he might make deft, pencil sketches, sometimes on scraps of paper, which ‘poured out like water from a jug onto the paper’ and included a note of proportions. If clients were present during the moments of creation, they watched with fascination as their house took shape before their gaze. Back at Lutyen’s office, the drawings were then passed to an assistant who produced a correctly-drawn scale plan.

Rather like the artist’s ‘golden rule of thirds’, Lutyens also developed, by trial and error, a simple but subtle system of ratios between dimensions and angles of a building which gave a distinctive character to much of his work. He decreed that all inclined planes should be at 54.45 degrees; that the intersection of two roofs should be inclined at 45 degrees and that window panes should have a ‘diagonal of square’ ratio which also gave the proportions of the whole window. If the building design failed to conform to his methods, then the building was adjusted rather than the proportions. His motto was ‘Metiendo Vivendum’ – ‘By measure we must live’ and he said of his work that ‘everything should have an air of inevitability’.