Samuel Hall and his family moved to Preston in 1915. He was landlord of the Red Lion until 1920 when the family moved to Luton. However, by 1925 the Halls were back at Preston and Samuel remained in the village until his death in 1940. His is a story tinged with disappointment and sadness.

Samuel Hall was born at Paddington, West London in 1869, the son of a house painter/decorator. He married Lily Woods at St Augustine’s, Kilburn, London on 19 August 1896. Lily’s father, Charles Wood, was a Scottish breeches maker.

When Samuel married, he described his occupation as a clerk but five years later, he was a company manager. He was employed by a Swedish match manufacturer and importer. By 1901, he and Lily already had two children Elsie Lily Hall (born in the summer of 1897) and Leonard Samuel Hall (born 1900) and the family were living at 8 Windemere Avenue, Willesden. During the next ten years, the family moved to a seven-roomed home at 55 Hanover Road, Willesden.

Meanwhile, three more children had arrived: the twins, Dorothy and Sidney Hall, born on Boxing Day 1905 and Cecil who was born on 6 May 1911.

Samuel was a ‘self-made man who rose to be a manager’. However, he lost his job and found himself at Preston as the landlord of the Red Lion in March 1915.

Seated are Samuel and Lily Hall;

standing are Dorothy and Sidney;

in the foreground is Cecil

His older children, Elsie and Leonard, stayed in London, lodging with family friends and attending a private commercial college in Mill Hill. Dorothy and Sidney left Chamberlayne Road School, Willesden and enrolled at the Preston School on 15 March 1915. Cecil began attending the school on 10 May 1915, when he was four. The school photograph which features him (right, centre) was taken in 1917

Samuel stayed at the Red Lion for five years. The twins left school on 19 December 1919, when they were fourteen, but Cecil’s name was more abruptly taken from the register on 24 March 1920, when he was only nine. There is a note on the register that the Hall family had ‘gone to Luton’. The reason for this move is unknown: was his tenancy at the Red Lion limited to five years? Did Samuel, a Londoner born and bred, fail to settle in a small Hertfordshire village?  Was he not suited to work as a landlord of a public house?

At least one of these questions can be answered, as by 1925, Samuel had moved back to Preston. Cecil, aged 16 (shown left), worked as a dairyman’s assistant at Temple Dinsley. One of the boys went on to work for the Seebohms at Poynders End.The family lived in a newly-built council house at Chequers Lane. The family album has a photograph of the house that has clearly been recently finished by the builders: it is lacking a front gate and fence or railings.

This postcard of Preston Well circa 1920 was sent by Dorothy to her sister Elsie. On the back she wrote, ‘Elsie, puzzle, find Cecil, love Dolly. Is Cecil the boy (second right)?

Above, Cecil and Lily Hall

(I am grateful to Samuel’s grandson, Ron Powney, for his recollections, research and photographs) 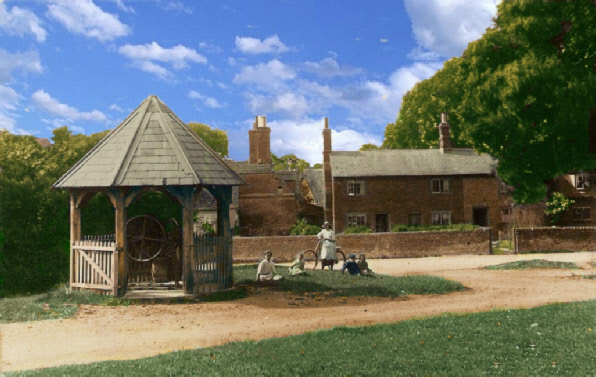 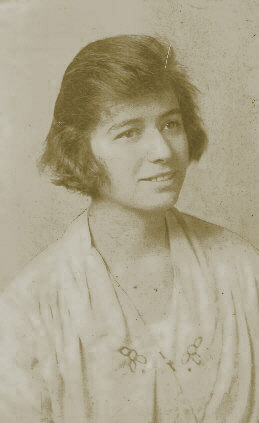 Summary of the events leading to the death of my Auntie Dorothy as gleaned from the reports of the accident and inquest in the appropriate editions of The Hertfordshire Express.

The accident occurred at about 5pm on Saturday 26 June 1926 at the junction of the Stotfold Road and Letchworth Hill when Dorothy was in collision with a Morris Cowley car driven by Rev. J Whitworth an RC Priest from St Michaels College, Hitchin.

Dorothy was severely injured sustaining a broken neck and shoulder blade and several fractures to other limbs. She was attended at the scene by Dr J H Galbraith of Hitchin who with help put her in his car and took her to Hitchin Hospital. She died there on Thursday 30 September 1926.

Samuel Hall.- Dorothy was employed as a domestic servant.
She had no bicycle of her own so she had hired a cycle in Hitchin. She did the journey on alternate Saturdays with her brother aged

15 (Cecil) He had ‘seen her at the hospital and she had told him about the accident. She explained about the danger of the road

(the turning  from Stotfold Road into the Letchworth Road) and told him she had taken particular care when turning into the road.

She said her brakes were in perfect order as she had cycled down Wilbury
Hill just before the accident. About 40 or 50 yards off the Letchworth Hill she saw a lorry go up the hill. She applied both her brakes and turned in the main road at a walking pace, she looked up and down the hill and saw nothing to hinder her. Beyond that she had no recollection of anything. ‘If the car was going up the hill it must (she
alleged) it must have been a long way down the road or on the wrong side.

Coroner - We cannot have that because she said she saw nothing

4.55 pm. He had an appointment at the Catholic Church in Letchworth. He had been driving the car since
February. When going up Letchworth Hill he saw a lorry in front of him, travelling in the same direction. He saw three tramps standing at the junction of the Stotfold – Letchworth road, but did not see a cyclist. He was about to overtake the lorry as it was about to pass the Stotfold road when the cyclist appeared having crossed in front of the lorry. The lorry was almost obstructing the Stotfold road. He could see to the top of the hill (on the Stotfold road) and it was free of traffic. He did not see the cyclist until she had crossed in front of the lorry. His car was turning to the offside of the road to overtake the lorry and if (he said) he had swerved round to own side again to his own side he would almost certainly had a head on crash. To avoid that he ran up the bank putting his offside wheels on the bank to allow room. The girls speed appeared to be about 12 mph. The lorry driver did not stop being unaware of the accident. Had the cyclist remained on the line she was following on the edge of the grass no accident (he declared) would have occurred. He took the girls speed to be so great that it carried her forward, right across the main road. He was about four car lengths from the lorry when she passed in front of it. He could not judge how far she was in  front of the lorry before she came out – there did not seem to be a safe distance between the lorry and the bicycle. He was just about to ‘hoot’ when the woman appeared. He was going about 20 to 21 mph. His back wheel had left the road 27 feet before the cyclist left the road and she was well on the road when he had steered off. His car hit her as she came across the track. 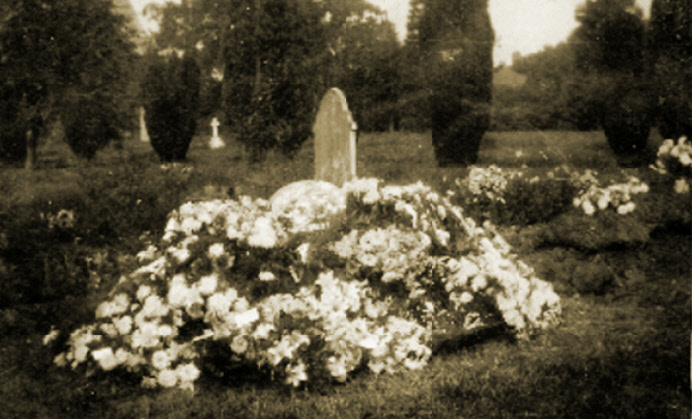 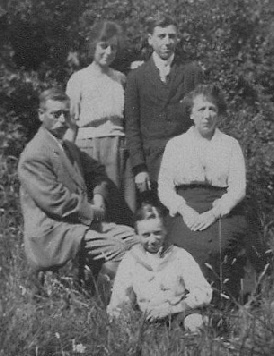 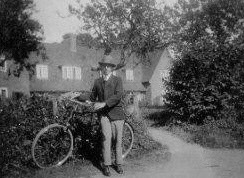 About this time, Lily began to suffer from delusions and was admitted to the Three Counties Asylum at Arlesey, Beds. One Saturday afternoon, 26 August 1926, Dorothy cycled the six miles to Arlesey to visit her mother and on the return journey, while riding down the hill between Letchworth and Hitchin, she was involved in a collision with a car. Although hospitalised for almost six weeks, she never recovered and was buried at St Martin’s Graveyard, Preston on 5 October 1926. Dorothy was just twenty years old. Her death ‘shocked the village’.

Samuel, now without Lily and Dorothy for company, was living with his son, Cecil. He went into service, possibly with the Pilkington family at Kings Walden. But Cecil did not stay in Preston - in the 1930s he became a footman to Sir William and Lady Firth at Hatchford Park, near Cobham Surrey. Samuel was now alone.

Samuel eked out a living, delivering newspapers around Preston. A villager recalls, ‘Sam was the local paper man. He wore working man’s clothes and collected the papers from Hitchin on his bike’.

Samuel died in 1940. Sidney (having been alerted by a neighbour, Mrs Crawley, who ‘kept an eye on Samuel’) travelled back to Preston with his wife, Rene, despite the deep snow that forced them to abandon the bus near the bottom of Preston Hill and then walk to Chequers Lane. He found Samuel’s home a little neglected - full bottles of milk stood on the stairs and a dead crow was on top of a wardrobe. Samuel was buried at St Martins on 17 January 1940, aged 70.

Even today, Samuel is remembered: ‘He used to talk to everyone in the village’. He was perhaps a difficult man to live with and had a fiery temper. He cycled to Stevenage in all weathers and had little in the way of home comforts. Sidney Hall worked as a painter at the Marmet pram factory at Letchworth in the 1930s before becoming an insurance agent for Liverpool Victoria in 1938. Later, he and his wife took over a general store at Henlow. Lily Hall died at Arlesey in 1950.

Dr J H Galbraith -  He was called to the scene of the accident and found the girl on on the grass by the roadside. She was unconscious and badly injured. With the help of others he put her into his car and took her to the hospital. It was not until the next morning that they discovered that her neck was broken. Her left collarbone, shoulder blade and jaw  were also broken and she was paralysed from the neck down and they dare not move her to take x ray photographs. They got the Red Cross travelling x ray to come and they took some very fine plates.  The cause of death was a fractured neck and paralysis. Deceased told  him she could remember nothing of the accident.

The tramps -  At about 5pm I saw the bicycle coming down the Stotfold Road, and statement also saw a lorry pass the bottom of the road going towards Letchworth, and then the young lady cyclist came out of the road and went right across the Letchworth Road. The driver of the car went across  the green sward at the side of the road to avoid her. She seemed to loose control of her bicycle and went into the motor car. I think the  cyclist was in the wrong as she seemed to lose her head. The cyclist was travelling at a medium speed rather too fast out of a turning.

The Coroner  -  The facts were quite simple. The unfortunate girl appeared to have lost her head as she came out of the turning. The evidence seemed rather contradictory as to whether the deceased came before the lorry or not. There did not seem to be any blame attaching to the driver of the motor car, although it might not be advisable to overtake a vehicle as it was passing a turning, he expressed sympathy with the relatives in their sad loss. He returned a verdict that the deceased met her death  through injuries received through colliding with a motor car.

The funeral of Miss Hall took place amid every manifestation of sympathy at Preston Church on Monday. The service was conducted  the Rev. Dudley Hiam and there was a very large congregation. The singing was led by the school children under Miss Deed the head-mistress, and the hymns ‘Brief life here is our portion’ and ‘A few more years shall roll’ were sung at the church. The twenty-third psalm being chanted.  At the graveside ‘Abide with me’ was sung. Over thirty beautiful wreaths covered the grave.