12 March 1900 - ‘Edith Crawley died yesterday of influenza and congestion of the brain. She had

appeared languid and I asked her if she felt well and she replied, “Yes, thank you.”’

13 Feb 1888 - ‘Only none children attended school this morning. School closed  through sickness.’

16 March 1888 - ‘Reopened school after being closed a month. Edith Marshall’s name taken off the

Some viruses were more virulent leading to tragedy:

9 March 1900 - ‘Edith Crawley, a bright girl in Standard V is seriously ill. The doctor reports it as a bad attack of influenza.’

It is noticeable from the log book how often the attendance was poor on Tuesday afternoons when there was a plait market at Hitchin. Then, the children either accompanied their mothers to Hitchin or cared for their siblings when their mothers went to market.

Many of the examples of absenteeism noted above were from spring through to autumn. Winter provided its own reasons for non-attendance - inclement weather. Some children, aged three of four, braved a long walk of up to two miles to get to school.  Deep snow and heavy rain storms would decimate classes:

14 Feb 1900 - ‘Very deep snow. Only 13 elder children and four infants attended - all lived close to the school. Some roads quite impassable’.

It wasn’t only snow and rain that cut the attendance, good weather also had an effect:

5 Mar 1996 - ‘A fine  Friday afternoon. Therefore, many of the mothers have left their children in charge of the babies.’

Often, pupils were needed at home to care for their younger siblings. My

was ‘frequently kept at home to mind babies and is backward in consequence’ (there were then three children aged 3 or less in the household). Carrie Wray

left school at an early age ‘ to help her mother’. This was a common comment made about older girls.

There were also rival attractions to divert the children:

10 March 1896 - ‘attendance poor: Hitchin market and a circus account for this’.

The headmistress sometimes locked horns with local farmers over the issue of employment of her pupils:

5 July 1898 - ‘Mr Piggott (of Temple Farm, farmer and school manager) is employing school boys although I have spoken about it. Mr Alfred Brown (at Home Farm) is likewise employing young school boys. Shall talk to the attendance officer about it’.

The problem was that although school attendance was compulsory and fines could be and were levied by the court following a report by the attendance officer, the fines were small (perhaps 2/6d), the magistrates were lax  and it was relatively expensive to bring cases to court. Parents and employers preferred to chance possible prosecution in order to add to the household income and complete the necessary tasks.

Another reason to miss school was that at busy times in the agricultural year children took their parents’ meals to them in the fields:

It is stating the obvious that for education to be effective, pupils must attend school. However, in nineteenth century Preston, there were considerable and varied pressures to keep children away from classes. Besides

the desire to teach her pupils, there was also a financial incentive for the schoolmistresses to maintain a high attendance. The school received a grant which was dependent on pupils passing their standard examinations and their regular attendance. In 1874 the annual grant was 6 shillings per student. In 1900, the grant had risen

to 18 shillings. Little wonder that there are dozens of entries in the log book relating that monitors had been

sent after absentees - like sheepdogs rounding up and penning errant lambs.

The main reason for pupils’ absence from school was that they could otherwise be at work, supplementing

their family’s meagre income. There was also the necessity of completing tasks like hay making and

harvesting when haste was vital. At these busy periods, the log book tells the same tale year after year:

gone to work for a time’.

is unsatisfactory just now owing to outdoor work being 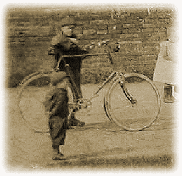 Many children earned income as straw plaiters and could be kept home to work in this cottage industry:

16 March 1900 - ‘Fourteen children away for minding babies, going with plait.’

There were several seasons when children turned to other pressing activities:

Aside from coughs and colds, epidemics swept through the school, sometimes resulting in its closure. For example, in 1875, there was an contagious outbreak of measles:

13 Oct 1896 - ‘Two infants, Emily Thrussell and Lucy Swain, are absent with whooping  cough and I fear more children are sickening.’

23 Mar - ‘Emily Adams has eczema in her head and has it every spring.’

22 July 1897 - ‘There is a good deal of sickness among the children. Several have a rash which I think is eczema. I have sent Maud Thrussell home with it.’