Sootfield Green is a mile north-west of Preston Green. The Hertfordshire Archaeological Trust stated ‘evidence of medieval and post medieval (pre/post 1485) settlement (here) is indicated by the remains of former buildings’.

The first historical mention of Sutefeild Green (sic) was in the Calendar to the Sessions Minutes Book of 1636. Dated 12 April 1636, it read ’...that the highway in the parishes of Kings Walden and Preston between Sutefeild Corner and Sutefeild Green leading from Kings Walden towards Hitchin is in decay and that the inhabitants of the said parishes ought to repair it.’ It is not immediately obvious to which road this relates - perhaps it is today’s Dead Womans Lane or, more likely, the footpath which extends west from Sootfield Green towards Kings Walden. Almost immediately, in 1638, Suttfield was again cited again, this time in a document held at Trinity College, Cambridge. These alternative spellings hint at the meaning of the name - in Old English, sut means south. Thus, the place and surname Sutton derives from sut and ton and means south-town. So, Sootfield is Southfield.

Maps and documents of the area reveal two other local references to Sootfield - the Enclosure document for Kings Walden refers to Sutfield Wood (which is shown on Bryant’s map of Hertfordshire [1822] and was owned by Joseph Darton of Temple Dinsley in 1816) and modern-day Ordinance Survey maps pinpoint Sootfield Springs (see map below).

Sootfield Green is situated at an ancient crossroads (shown above) where the Preston to Charlton Road meets Dead Womans Lane and Wayley Lane (which becomes Tatmorehills Lane). Although today, the latter is not a designated road, in the past it was the means of connecting the old manors of Stagenhoe and Wayley and was an alternative north-south byway linking Wayley, Charlton and Hitchin with St Pauls Walden and Stagenhoe.

It is not surprising, therefore, that homes should be built here, especially as there are local farms and estates such as Offley Holes, Pond Farm and Castle Farm that needed labourers - apart from the nearby villages there were few homes in the vicinity available for farm workers. The style in which the cottages were built indicates that they were intended for agricultural labourers, although a travelling straw plait dealer also lived there in 1841.

The two cottages at Sootfield Green were erected in the eighteenth century. They were of two storeys and were built of brick with a tile roof. Originally the two front doors were side by side with a tiled porch. Each cottage had extensions to the side and two fireplaces facing east and west. They also had a winding staircase to the upper bedrooms. In 1873, they were described as having four rooms, and so were probably ‘two-up, two-down’ cottages. The homes were modified firstly during the nineteenth and then the early twentieth century so that although originally intended to be two homes, today it is one property. 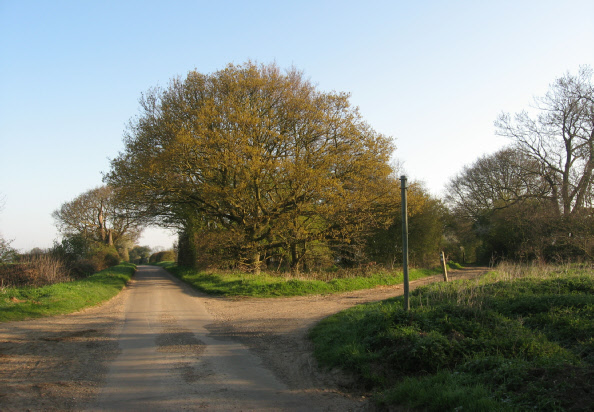 As the map above shows, Sootfield Green was within Hitchin parish, just - the parish is squeezed here between the boundaries of Ippollitts and Kings Walden.

For a century from 1821, the cottages were occupied by two sets of families and most bread winners were agricultural workers.

In 1821, William Groom (tradesman, 1780 - 1839) and Daniel Morgan (ag lab, 1863 - 1823) occupied the two cottages at Sootfield Green according to the rough Preston census. They were owned by the Darton family of Temple Dinsley. Each cottage, yard and garden occupied about sixteen perches.To the south of the homes was a field of almost three acres known as Cooks or Cocks Close.

William Groom was conformed as a tenant at Sootfield Green by a will dated 9 November 1821. It was drawn up by John Pitkin of Sootfield Green and stated that he left his whole estate (worth less than £20) to ‘my nephew, William Groom, with whom I now reside’. The will was proved a few months later on 9 January 1822.

By 1837, the families of John Day and William Westwood were the tenants at the Green, although by 1844, Daniel Morgan (bn 1803) was living there and his next-door neighbour was the straw plait dealer Edward Willmott who also rented the three acres of land to the south of the cottages.

In 1851, Daniel Winch (bn 1812) and his wife, Catherine nee Fairey, and their five children were living at the triangle. Catherine was my great grandmother’s sister. Winch was an incorrigible poacher who was also suspected of setting fire to a haystack at Stagenhoe Farm. Living next door to the Winchs were the widower, William Westwood (bn 1793) and his two spinster daughters.

Ten years later, the residents were the widow, Ann Moules (bn 1796), and neighbours, John (ag lab) and Sarah Fitzjohn, together with their nine children - all shoe-horned into a four-roomed house!  John worked at Castle Farm and in 1862 he was fined for quitting his job after two years to look for a job that was better paid. Around this time, ten of his ‘tame fowl’ were shot after being found in a field of barley.

In 1873 the three acres to the south of Sootfield Green were farmed by Piggott of Temple (Dinsley) Farm.

By 1881 the Thrussells had arrived: George (bn 1851, hay binder) and Sarah Ann in one cottage with Joseph (bn 1829, hay binder) and Eliza Thrussell next door. In 1871, Joseph Thrussell had been fined for being in charge of a horse and cart while drunk.

A decade later, Frank (ag lab; bn 1861) and Emma Brown with their eight children resided at Sootfield Green and George (ag lab, bn 1855) and Mary Reed were next door.

The occupants of Sootfield Green in the twentieth century

In 1910, the Inland Revenue ‘Domesday Survey’ recorded that the cottages were inhabited by Charles Thrussell and George French. They were now owned by Mrs E McDonnell of 85 Bancroft, Hitchin. The annual rent was

£6 10/-. The homes were constructed of brick with a tiled roof and had two kitchens and two bedrooms each, together with a barn. They were in ‘poor repair’.

Only one household at the Green in 1925 suggests that the cottages were then in a dilapidated state. The renovation and conversion into one home probably took place in the late 1920s. 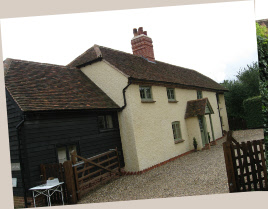 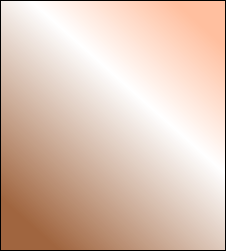 A comparison of the contours of the houses in 1811c and 1898 reveals the modifications to the buildings during this century.

Also of interest is the width of the two adjacent lanes. They are drawn faithfully from the original maps and show that Dead Woman’s Lane was the wider byway by far when compared with the Preston to Charlton road 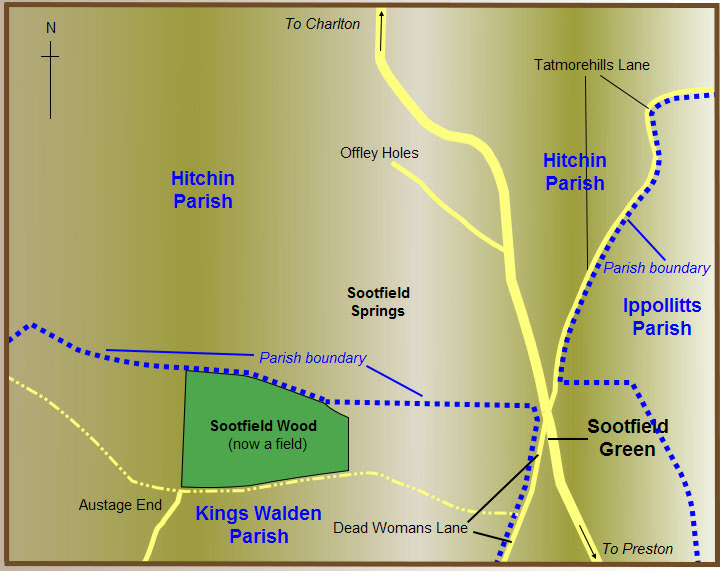 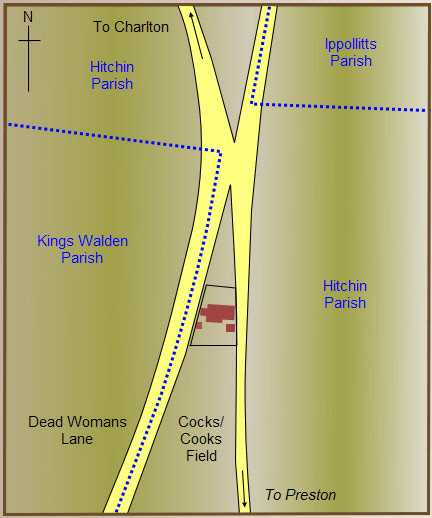 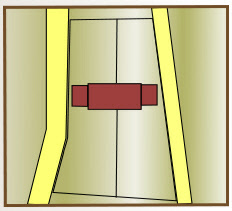 During World War II, a Wellington Bomber crashed and burnt out at Sootfield Green. The

wreckage was an object of curiosity for local boys, searching for souvenirs.

at Sootfield Green (with a ‘noisy generator’). The novelist, Victoria Glendinning, visited with her young children.

manager of Hawker Siddley (shown right) lived at Sootfield Green - from 1966 to the 1970s with Kathleen and Marijke Fossett.