Given the existence of records, an optimistic ‘give’, it is possible to trace details of homes through history.

The relevant records for Preston are those for manors, the wills of local folk, indentures, early censuses and maps together with awards which are like snapshots of who lived where at a specific time.

In the case of the manor of (Temple) Dinsley, these are the surviving manorial records:

A complete summary of fines for property transactions in 1664

A precis of property transactions between 1664 and 1718

A complete summary of fines for property transactions in 1715

An incomplete summary of fees for property in 1761

Thus, over 281 years, there is a complete record except for seventy-seven years. Many of the missing years may be completed from summaries and later court notes that refer back to properties changing hands during the lost periods. Additionally, copies of individual manorial records are kept loosely at Hertfordhire Archives and Hitchin Museum.

The significance of these records is that specific cottages and pieces of land were assigned a set annual rent which was payable to the Lord of the Manor. That fee varied from property to property but, in those days of no inflation, the rent did not change over centuries. Thus, if the rent on a property was 18/- in 1664, the rent was still 18/- in 1922. (Occasionally, a property would be split into parts and each part carried a fee, the sum of which was the same as the fee of the original property.) This makes tracing the history of home-ownership at Preston feasable.

The same point is made in The Common Stream by Rowland Parker, which is a fascinating historical study of the Cambridgeshire village of Foxton. In it he explains how the history of individual houses can be examined. If the tithe maps and awards of the nineteenth century are used as a starting point, it is possible to work back using manorial records. He notes that the researcher is helped as the rents of homes ‘remained unchanged for centuries’.

In the case of Preston, there are two historical maps that show each home in detail and have an accompanying ‘Award’ which notes owners and occupiers: a) 1811 - 1816, with an Award and also a matching valuation in 1825 and b) the Tithe Map and Award of 1844.

The manorial records sometimes mention the tenants in properties at a given time, and these may often be married with the census details and the notes on the map awards so that the cottages in the manorial records may be identified.

An example of tracing the history of cottages at Preston

This is an extract from the Temple Dinsley manorial court record dated 6 December 1797. It notes the death and will of Daniel Joyner and two of his bequests: 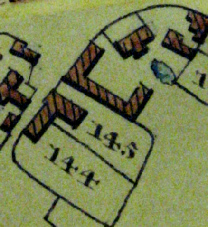 So, the Andrew family inherited what is known today as Laburnum Lodge and the English’ were bequeathed the adjoining house. These still stand today, near the Red Lion: 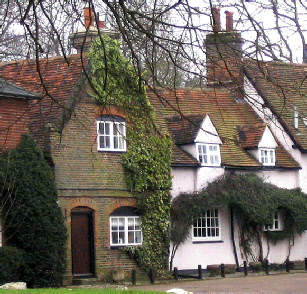 Now that we have identified the cottages, and know that each of their annual rents was 6d, we can work back through the manorial records to see who owned them.

These cottages were the property of the Joyner family throughout the eighteenth century and were referred to as ‘two tenements and orchard at Preston’ on 13 October 1773. They had been combined in the ‘Survey of Temple Dinsley rents 1715’, when their rent was 1/- and they were owned by John Joyner and Daniel Joyner before him.

There is no record of these properties in the 1664 Survey of the Manor of Temple Dinsley, so it may be inferred that  these homes were built after that time, possibly by Daniel Joyner. However, it is recorded that there is a spine beam in Laburnum Lodge dated 1653.

The following information is based on my interpretation of all these records.

I do not claim infallibility during this exercise. It is appropriate that I write this on the day that Einstein’s theory of light has been debunked!

Here are two significant results that illustrate how this exercise can provide interesting details:

Taking the Swain family back another generation?

There is an article about the Swains of Preston at this link: Early Swains. It begins with Edward Swain who died in 1752. There has been a considerable debate among Swain watchers about the identity of Edward’s father. This may be settled as a result of this examination of manorial records.

The first mention of Edward Swain in manorial records is in 1691:

So, Edward purchased a one-acre field called Todds before 18 June 1691 from John Godfrey. This indicates an association with Preston from around that time. (He bought his home at what is known today as the Red Lion between 1701 and 1704) Edward was to bequeath this field to his son, John. Its location known: Link: Todds

However, another Swain appears in the manorial record, Stephen Swain. The following holding of property is noted from the ‘Survey of Temple Dinsley Rents 1715’:

A relationship between Stephen and Edward is confirmed by a note of ‘Rentals from 1761’:

On the basis of this, were Stephen and Edward Swain related. Was Stephen, Edward’s father?

There is a record of an Edwardus Swaine, son of Stephanus and Maria, being baptised at Stevenage on

29 August 1669. (Stevenage is around three miles from Preston.) If this was the Stephen mentioned in the Dinsley records, he would have been about 71 in 1715.

Probably the best way to confirm this is to obtain Stephen’s will. But a brief search does not indicate it exists. Perhaps a more fruitful search can be made when next at Hertfordshire Archives.

The antiquity of the Red Lion, Preston

The article about the Red Lion which is featured on this web site states, ‘The history of the two cottages which now form the Red Lion can be traced back at least to the beginning of the 18th century. The Manor Court Rolls of Temple Dinsley record a series of transactions during the century, for in 1710 William King acquired the larger house from Richard Deamer.’

From my research, I believe this to be incorrect and that the Red Lion is considerably older.

The property trail begins with the Manorial Court of Temple Dinsley dated 25 April 1811. The record notes a sale of property from Stephen Swain to Joseph S

This clearly relates to the sale of the Red Lion with its three acres of land that stretched around to Back Lane. The rent for this property was 18/-. In the Manorial Records, there is no other property with a rent of 18/- - it is unique. Moreover, when  transactions about this property are recorded, there can be no doubt that they are referring to the same piece, as will be seen.

The ‘Survey of Temple Dinsley Rents 1715’ shows this item :

Note that the rent is 18/-, but the previous owner was not William King (as stated in the article) but Leonard King.

There was a transaction involving Edward Swain and William King in 1710 - but note the wording:

The correct transaction, however, took place in 1704 between Edward and Leonard King:

Now, one can trace back the history of the Red Lion still further. The ‘Survey of the Manor of Temple Dinsley’ dated 1664’ recorded this property with a rent of 18/-

The chain of transaction between John Riches and Leonard King is clear:

The extract noted above is dated 20 October 1673. It refers to the same property held by John Riches and in the right margin it adds, ‘now Ed(ward) Swain’s’. John Riches was taxed for two hearths in 1662.

This means that the larger of the two cottages that comprise the Red Lion was built before 1664 - about fifty years earlier than previously thought.

4)  John Ritches – one tenement and orchard with three acres of pasture. Rent: 18/-

13)  John Godfrey – one messuage, an orchard and forty acres of wood pasture and arable.. Rent: 15/-

...and 4 acres and pightley bought of Mr Rayner

To Sarah Field a house and orchard at Cranwell Green from relative (?) William Barker ? (3 Feb 1768)

To  ? Newman, house, barn, stable and 1 acre of pasture and orchard from late father, John Newman

To James Joyner two tenements and orchard at Preston from his father, Daniel Joyner (13 Oct 1773) £7

To Robert Brown, a messuage on Preston Green, on death of mother Mary Brown

To William and Mary Oakley, a messuage on Preston Green, from Cornelius Oakley and others

To Dennis Brown, a cottage and 6 poles of land on Preston Green from mother Mary Brown

To Nathaniel Hobbs for messuage and land at Preston, on death of father, John Hobbs (3 July 1719) £54

To  Henry Godlinstock, a messuage in Preston surrendered by William Clark (15 April 1663) Fine £1

To Thomas Browne a messuage on Preston Green called the ‘Homehouse’ from Dennis Browne.

To John Bowstred, a messuage at Preston inherited after death of mother, Frances Bowstred.

To Robert King, one messuage; cottage and parcel of an orchard at Preston Green descended from

To John Izard, a messuage and three acres of land and pasture at Preston from John Farr

To John Andrew, a messuage at Preston descended from his father John Andrew (11 Jan 1665) £1

To Thomas Oakley and wife Alice, a messuage on Preston Green from William Smith

To John Clifford and wife Mary, a messuage on Preston Green from Richard Wheatley.

To Robert Browne and wife Catharine, two tenements and 16 poles in Preston from Thomas Browne

To Michael and Henry Izard, a cottage and three acres in Preston from John Izard (25 June 1674) £9

To Richard Dearmer, message and orchard at Preston Green, from John Clifford (26 April 1677) £1

To Andrew Bowstred,  two cottages and 16 poles at Preston Green from Robert and Catharine Browne

To Matthew Watts one messuage, one cottage and parcel of an orchard of two rods at Preston

To Grace and Mary Carrington, a messuage at Preston Green from John Carrington.

To Andrew and wife Elizabeth Bowstred, cottage and 15 poles of land on Preston Green from

To John Joyner a messuage cottage and part of an orchard at Preston Green, from

To John Heath jnr a messuage cottage and part of an orchard at Preston Green from John Joyner.

To Thomas Oakley, a messuage at Cranwells Green from David Clements  deceased

To Ralph Bowstred, cottage and piece of land near Preston Green from Andrew Bowstred

To Mary Heath (wife of John) for cottage on Preston Green on death of brother, John Carrington

To Anne Marshall (wife of Jeremiah) for a cottage in Cranwell Green from her father, Thomas Oakley

To Alice Joyner, a message and three acres of land  in Preston (previously Izards) from Richard Heath

To William Joyner, a messuage and cottage and part of an orchard in Preston (previously Robert Kings)

To Edward and Mary Swain, one messuage near Preston Green and three closes of pasture of three

To Mary Browne, a cottage and 6½ rods of land near Preston Green, from Ralph Bowstred.

To Sir James Read, relief on his death re: house and land at the lower end of Cranwell Green (8 July 1713)

Relief (a levy charged when heirs took over property) to William King on death of father, Leonard King