Back Lane and Back Street are common addresses in small towns and villages - they are roadways that run parallel to the main thoroughfare and often act as a boundary between homes and fields.

In the nineteenth century, Preston’s Back Lane was also known as Paynes Field Lane as a field of that name abutted the lane to the west.

Historically, Back Lane was the poor end of Preston. In the seventeenth century, a small group of cottages there attracted a manorial rent of only 1d when even ‘a little cottage with woodshed’ near Preston Green had an assigned rent of 4d. In 1844, it is striking that when the rate was collected seven out of the ten households along Back Lane qualified for relief and paid no rates.

In 1898, there were nine inhabited cottages along Back Lane. Three homes were ‘two-up; two down’ and six consisted of just two rooms in total. They were  populated by farm labourers and widows, though the size of some families who existed here is surprising:

No photographs survive of these tumbledown homes which were demolished in around 1916. However, apart from two semi-detached homes which were built of brick and had thatched roofs, the others were all brick-built with tiled roofs.

The record of owners in the manorial rolls is patchy - which may reflect the worth of these homes. 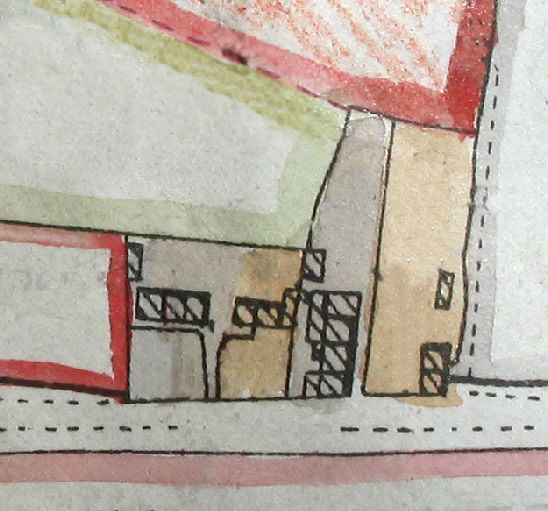 Map from 1898 showing the cottages and outbuildings along Back Lane

Cottages A,B,C and D along Back Lane

These cottages are not included in the 1664 Survey of Temple Dinsley - but they do feature in the Survey of 1714. It notes that they were owned by Edward Brooks and by Cressy before him. A manorial rent of a paltry one penny was paid every year. The Hearth Tax of 1674 shows Ann Cressy as having two houses at Preston. This suggests that these homes were built between 1664 and 1674.

Edward Brooks, a labourer, died in early 1738 and in his will, proved on 28 February 1737 (which he marked), he left ‘the (tenement) I live in and another small tenement adjoining’ to his wife, Sarah Brooks.

The Survey of 1761 shows the new owner as Daniel Joyner, carpenter of Preston (late Brooks). When Daniel died in 1794, he bequeathed the freehold cottages at Back Lane to Joseph Pedder, the younger.

The deeds of these four properties describe their evolution: it was ‘formerly one cottage’ which sometime past was divided into two dwellings (A&B). Its occupants had been Moses Palmer and James Lines, followed by William Ward and James Dollimore and then William Ward and James Fitzjohn. Two more cottages (C&D) adjoined to the south-east side which were built on the garden of the original cottage. William Gentle and James Lines and then Ann Croft and William Sturges lived in these cottages.

By 1816, the properrty had been bought by John Whitney, a grocer from Hitchin. Around this time Whitney had also loaned £60 to Stephen Swain on the security of the house at the corner of School Lane and the Green, £500 to Joseph Saunderson on the ‘Red Lion’ and a further £90 against cottages on the north side of Church Lane.

Whitney died on 31 December 1820 and his devisees in trust for sale sold the Back Lane property to Elizabeth Darton of Temple Dinsley on 31 March 1830 for £130. Its occupants in the 1830s were William Sturgeon, George Rowbottom, Thomas Rowbottom and Mexon. Her heir, Thomas Harwood Darton now owned the four cottages. In 1844, they were inhabited by Sturgeon, the two Rowbottoms and William Maize.

Following Thomas H Darton’s death in 1858, his son William Henry Darton acquired the property which was becoming more dilapidated. When the William sold Temple Dinsley, he sold it as a separate lot to the illiterate Preston labourer, Henry Jeeves, on 25 March 1874 for £125. Jeeves lived in one of the cottages.

In turn, Jeeves sold the four tumbledown homes to Ralston de Vins Pryor for just £97 10/- on 27 June 1899. They were home to Rebecca Crawley, Ernest Jenkins, the widow Day and Jeeves himself.

When the Inland Revenue Survey was conducted in 1910, all four dwellings were assessed as being in a poor condition. The pair on the west (left) side were built of brick with a thatched roof and were occupied by Rebecca Crawley (one up/one down) and Henry Jeeves (two up/two down). The other pair were also of brick construction but with tiled roofs. In them, lived (?) Chapple and Arthur Chalkley. Both cottages were ‘two up/two down’.

Eventually the homes, which were probably around two hundred and fifty years old, were demolished in around 1916. 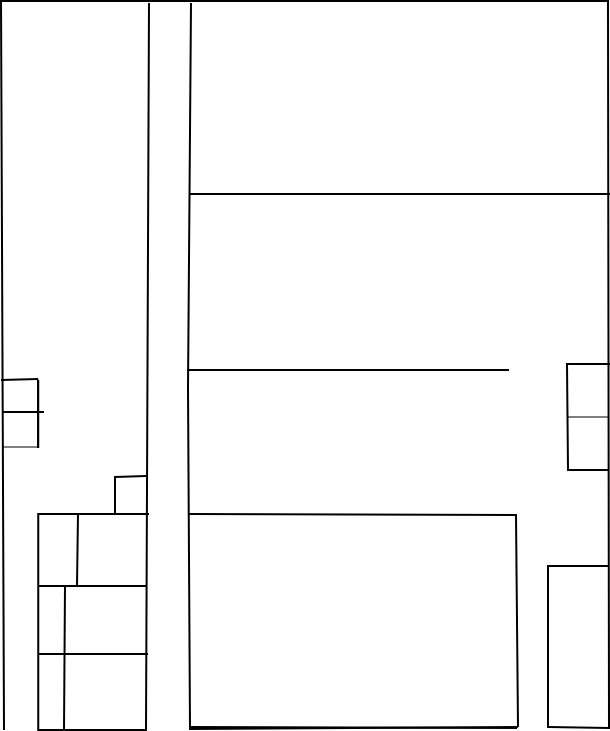 Reproduction of a plan of six cottages on Back Lane in 1883. The plot abutted to the east the four homes discussed earlier.

Legal papers reveal the changes that took place to this site, and approximately when they occurred. The first available document is dated 1783, indicating that the property was built sometime before this date.

It was originally one house - presumably E to H shown above. In the early 1800s it was occupied by Thomas Woodley. After his death in 1826, it was converted into four homes. Then in the late 1830s, two more homes were added to the site, I & J above, which were probably converted outbuildings.

This is the paper trail that relates to these dwellings:

1783 Indentures of Lease and Release: the Release (a means of transferring property between parties without drawing up a deed) between (1) Thomas (the elder) and Elizabeth Rowe, (2) John Saunders, (3) Joseph Godfrey and (4) Samuel Hare.

1830 Indentures of Lease and Release: the Release between (1) William Parker, (2) William Reed and (3) William Bentley

1830 Mortgage of £100 between (1) William Reed of Whitwell and (2) William Bentley of Hitchin. The property is revealed to be originally one cottage, but had later been divided into four cottages. It had been occupied by Thomas Woodley (who died in 1826); then by Joseph Dollimore, James Godfrey, Thomas Rowbottom and John Bouse and now by John Bouse, John Mays, - Wade (sic - aka Ward) and one standing empty. It measured 15 poles.

March 1835 Indentures of Lease and Release: the Release between (1) William Reed, (2) William Bentley and (3) Mary Sargeant

1854 Will of Mary Sargeant, spinster of Preston. She had died leaving the residue of her estate to John Reed. He died in March 1854 and his estate devolved to his only brother, George Reed.

1855 Sale  by George Reed, carrier of Preston to Charles Swain, licensed victualler, for £85.

1909 Exchanged between RdeV and GIE Pryor.

1910 Owned by GIE Pryor. Occupied by Mary Currell, Hannah Crewe (James Freeman, erased), Arthur Jenkins, L French and Alfred Wray (Ernest Bell, erased) who lived in either I or J, or both. They were all described as brick and tiled cottages with two bedroons, a kitchen and a scullery. They were in poor repair.

October 1913 the property was sold by GIE Pryor to Herbert Fenwick for £495. It Included ‘those five cottages, formerly six’ at Back Lane. Currell and now of Alfred Wray, W Ewington, A Farey and Mrs Mary Currell.

These homes were demolished in around 1916.