This cottage (1900c) was the Horse and Groom Inn

Originally, the property was known as Linces Cottage in 1818 when it was owned and occupied by one, Hobbs, but whether he sold it to Marshall and Pierson is not known. The cottage still stood until the beginning of this century and one of its inhabitants still remembers the cellar there: she is now in her 92nd year.

Marshall and Pierson were forced to sell their business - some said that ‘the badness of their beer’ caused their low trade. Originally it was intended to sell the properties as one lot, but by dividing them into about 50 lots the sale fetched an extra £7,000.

Their business rival, William Lucas, bought the Adam and Eve, Hitchin, a beer shop at Arlesey, the Bucks Head at Wymondly and a half share of the Red Lion at Bendish. he was not interested in the Horse and Groom for he was already supplying beer to the other public houses in Preston.

When William Simpson auctioned the Horse and Groom it was described as having a tap room, parlour, bar, cellar and several bedrooms. There were also stables and outhouses, a yard and garden (when Henry Darton bought the beer shop for £400). the buildings stood on the corner of Chequers Lane and the Green (shown below), the site now part of the garden of Preston House.

By 1959 Flowers disposed of the orchard attached to the Chequers and closed down the public house. Sadly, the empty building was vandalized and set on fire. Fortunately it was not damaged beyond repair as it is one of the oldest and most attractive hoses in the village. In 1960, the Chequers was purchased by Thomas Bertram Daltry, a solicitor by profession. He made a covenant with the brewers not to carry on any licensed trade at the premises as Flowers still controlled the Red Lion on the Green.

Since that time, Chequers Cottage as it is now known, has been carefully restored to reveal its ancient timbers and inglenook fireplaces. There are two cellars, one with an unusual barrel roof. Old photographs indicate that it was, at one time, two cottages while recent building work uncovered that a third cottage once lay behind the existing house.

Traditionally the inhabitants of Chequers Lane frequented their nearest public house, but after the Chequers closed its doors in 1959, the Red Lion was the only licensed house in the village.

It was not unusual in the 19th century for even a small village to be well provided with public houses, therefore the reader will not be surprised to know that Preston had, at one time, a third public house. This was the Horse and Groom and its owners, Marshall and Pierson, were brewers of Hitchin. When it was first opened is unknown*, but it was run by Charles Swain as a beer shop in 1838. Four years later, the Horse and Groom was occupied by widow Swain who lived there with her 13-year-old daughter, Ann and Daniel Sanders, a 15-year-old gardener.

The brewers W & S Lucas had continued to renew their tenancy and in 1900 Henry Prior gave them a 21-year lease at £55 pa and by the time this expired there was a new owner at Temple Dinsley, Douglas Vickers, and the Hitchin brewers obtained a further lease of ten years for £40 pa.

After World War One the Lucas family sold their business to J. W. Green of Luton. Although it was agreed that the Lucas public houses would continue to run separately, by 1923 the Hitchin Brewery was closed down and its licensed houses were incorporated with those of Greens. That same year, when the lease was terminated, Douglas Vickers sold the Chequers to J. W. Green who had in turn amalgamated with Flowers of Stratford-on-Avon.

During this period, the Dartons, who now owned the Temple Dinsley estate, had leased the Chequers to Lucas, a brewing family of Hitchin. Their maltings and brewery stood in Sun Street until about 20 years ago when the buildings were demolished to make way for Crown House. Although Quakers by persuasion, they were able to reconcile their religious convictions with their trade in strong drink.

Henry McLean Pryor purchased Temple Dinsley in 1873 and at that time the public house, stable and barn was rented by Lucas for £30 pa. In May the following year the licence was transferred to William Jeeves, who became the new manager of the Chequers. Some years later his wife Mary died, leaving him to care for their five children. He continued to run the public house until December 1891, having been there for over 17 years.

From now onwards a series of licensees can be traced - Thomas Jeffrey to 1895. He was succeeded by Frederick Redrup who in turn was followed by John Walkden in 1900. These tenants did not stay long in the village and three other managers, William Pugh, George Brazier and William Brown were at the Chequers during the early part of this century. In 1916, William Claxton held the licence, followed by Henry Carter, George Giddings and Frederick Andrews, the latter remaining from 1924 until 1942. Charles Izzard ran the public house until 1949 until it was taken over by Frank Harper who, like one of his predecessors, had been a local gamekeeper. He was to be the last publican of the Chequers which had supplied the villagers with their ale and beer for well over 150 years.

Records for the 18th century bring to light the history of the two buildings which became the Chequers and the Red Lion. The former remained part of the Temple Dinsley estate until recent years and the occupants of the‘Chekers’, as it was called in 1788, were tenants of the manor. John Young, the victualler there in 1784, was succeeded by his son who also worked as a gamekeeper on the estate. Manor courts were held at the Chequers and it was at these courts that details of copyhold property were entered on the manor court rolls when changes of ownership occurred.

The Young family lived at the Chequers for over 60 years and in 1841 John and Ann Young were there with their five sons, the eldest working as a wheelwright. At some time during the next ten years they moved away and by 1851 Henry Bradden and his wife Rebecca ran the public house with the help of an 18-year old servant girl, Eliza Tafft. When the census enumerator called to take particulars of the household, poor Eliza did not know where she had been born. ten years later when the Braddens were both 81, their 20-year-old niece, Mary Crawley, was their servant.

About three miles south of Hitchin lies the quiet hamlet of Preston. Very rarely in the news, it recently gained national publicity when some local residents bought the Red Lion public house on the Green.

From medieval times Preston has always been dominated by Temple Dinsley and as far back as the early 12th century the Knights Templar claimed the assize of bread and ale. This right had been given to them by the Baliol family who were the manorial lords of Hitchin and the surrounding countryside. Later, in 1266, Henry II ordered that the price of bread and ale should be based on the current price of corn and malt and this system of price control was to continue for centuries. When Sir Ralph Sadlier purchased Temple Dinsley from Henry VIII in 1542 his grant also included those ancient rights over the price of bread and ale in the manor.

The Red Lion by N Freebody 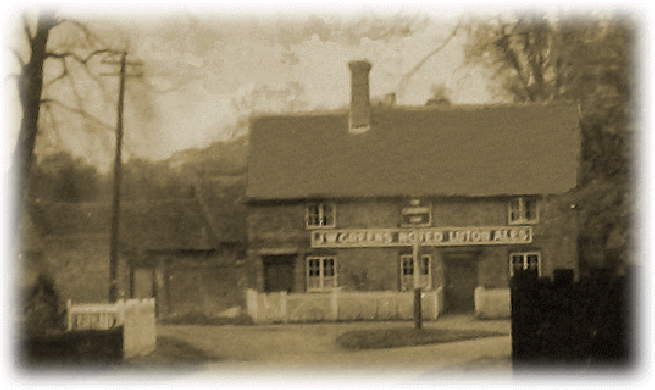 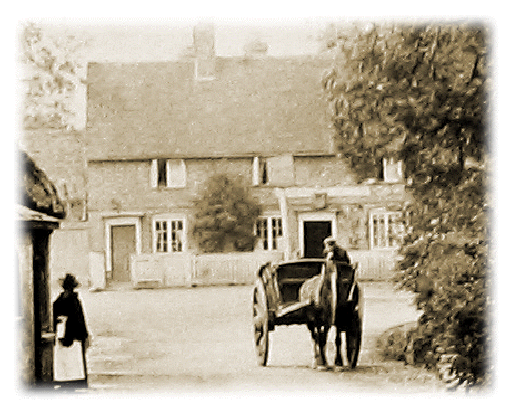 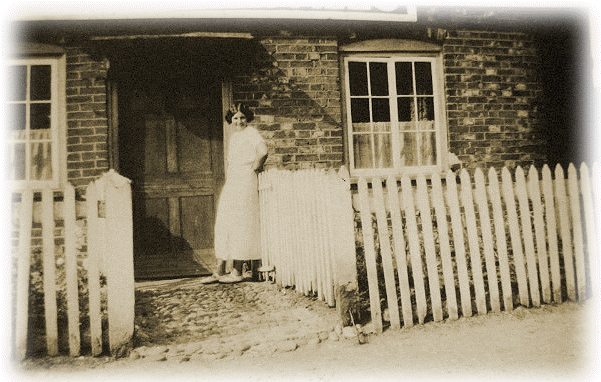 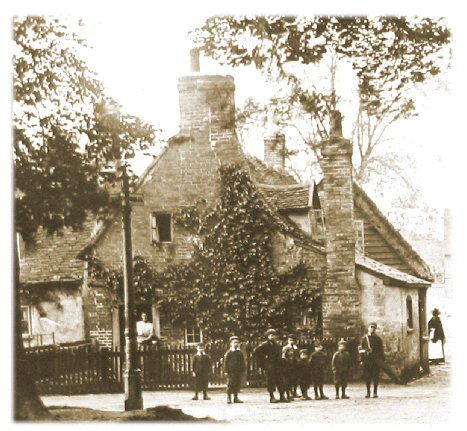 The Chequers Inn and

The Horse and Groom 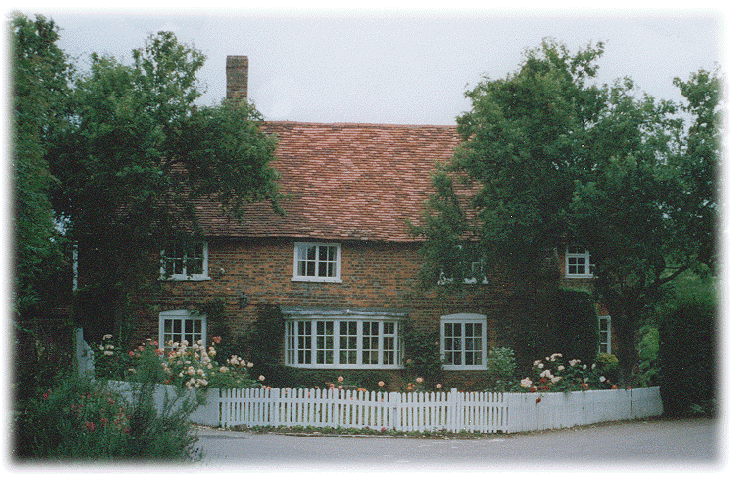 Whether any of the villagers who brewed their own ale sold it to their neighbours is unknown, but in 1665 Thomas Driver of Cheshunt was accused of keeping an unlicensed ale house at Preston. he ignored the authorities and in 1669 was again charged with the same offence. About this time a certain Mathew Driver was an innkeeper in Hitchin, so it is possible that the two men were related.

The best cellar was kept by John Everard, a tenant of the Sadliers of Temple Dinsley. When he died in 1692 he had ‘seven hogshead, five barrils, drink stalls and bears small and strong’. Two of the men who valued his estate were maltsters of Hitchin, William Ireland and William Potts. Everard was a wealthy farmer who lived at Temple Dinsley, the largest house in the village, which has been enlarged several times since then, the last time by Lutyens. It is now better known as Princess Helena College.

Further controls over the selling of ale were imposed in 1552 when all ale house keepers were licensed by the local Justices of the Peace. Very few documents have survived from this period but among the Victuallers Recognizances in the Hertfordshire Record Office is the name of John Tufnale, the Preston blacksmith, who was granted permission to sell ale in 1597. Such trades were frequently linked together for obvious reasons and on occasions an ale or beer seller also sold bread to his customers. According to the records, 14 years later in 1611, widow Buckingham eked out a livelihood by selling ale to the villagers.

During the 17th century some of the inhabitants of Preston brewed their own drink, no doubt formally purchased in Hitchin. Some stored it at home as their inventories show, for in 1647 Affabell Bibswell and his wife Grace kept two little barrels in the buttery together with a cheese press and a salting trough for their meat. A year later, in 1648, Thomas Crawley had ‘a buttery and drink house with tubs and other things” valued at £1 10s. Thomas Goldsmith was a well-to-do farmer and at the time of his death in 1669 he had his own brew house which contained copper and some brewing vessels. Three years later the inventory of widow Agnes Foster lists “brewing vessels, tubs and drink vessels in her buttery’.

This article was researched and written by Preston resident, Nina K. Freebody. It was one of two pieces featuring the public houses of Preston. It appeared in the magazine, ‘Hertfordshire Countryside’ in November 1983. I am grateful to Christina Clews and Robert E. Freebody for their  permission to include this transcription.