Parishes were not just about the tithes, upkeep and pastoral care of the local Church. From the time of the Tudors, parish officers were also responsible for the poor, the highways and petty law and order within its perimeter. Local inhabitants grazed their livestock on common land within their parish. Hence, precisely of what land a parish consisted became more and more important.

For example, a stranger might die within the parish boundary. The cost of his burial was bourne by the parish. Now, if he perished near the parishes’ perimeter, then it was a simple matter to heave the corpse into the next-door parish - just so long as their officers didn’t heave it straight back.

So, through the centuries (and without maps and with a largely illiterate populace), how was the boundary of the parish remembered and its area of jurisdiction preserved? This was no easy matter for rural parishes - especially if they were large.

The boundaries were marked by immovable lines created by lanes, ditches and rivers. There were also large stones or boulders and trees which were recognised as being part of the margins.

At regular intervals, perhaps even annually, the parish priest and his officers, accompanied by local residents and children, would walk around their border to cement in several minds the knowledge of exactly where the parish ended and the neighbouring parish began. Perhaps the priest would intone a Psalm or a blessing when the markers were found. The children might beat the pivotal stones or trees with birch or willow boughs or might themselves be beaten or bumped on the markers as an extremely personal aide memoire This was known alliteratively as ‘beating the bounds’ or ‘perambulating the parish’. The exercise could take days to complete.

Even today, perambulation is quite lawful - the photograph above was taken at St Albans in 1913 - (though only once in three years) and parish officers have the right to enter private property to complete their task. Expenses properly incurred (including the cost of refreshments but not music) could be paid from the rates. 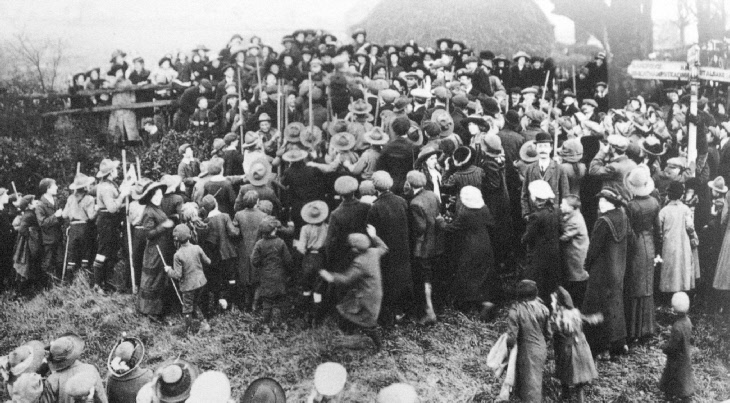 Preston and perambulating the parish

Until recently, the only reference to beating the bounds around Preston was discovered in Reginald Hine’s ‘History of Stagenhoe. He commented, ‘The acreage and boundaries of Earns Field Wood were certified by George Wright of Preston Hill (Farm) who declared himself “well acquainted with the tenure and position of the said wood from the fact of my having acted as Overseer and having in exercise of my duties in that capacity beaten the bounds of the parish as an annual custom”.

However, a document has come to light which describes in detail the walking of the Hitchin parish boundary in 1801. This is reproduced below - the portions in blue being those that refer to Preston and its environs. Also shown are extracts of a map dated 1811 which show the parish boundary.

A few comments about the  description of the perambulation: a number of trees are mentioned as landmarks, including one that no longer existed; apparently the route took the procession straight through two mills, which the officers had the right to so do; property inhabited by my ancestors is mentioned as part of the border - Braddens orchard and close at Charlton; the perambulation took three days; Joseph Darton took part.

Beginning at the south corner of Hitchin Priory Park, the lane there being called Chappel Lane End, leaving Madencroft Kiln (sic) on the left....keeping down the lane to the first turning, then turn to the left up Broad Lane....keeping then to Wellhead Lane....turned to the right down the lane to the bottom of the hill....turned to the right along the bottom of ridge field....on an elm tree, keeping forward to the corner of another ridge field....on an elm tree, then bearing right across a field of sward at the time called Mill Pond Close....at the upper corner against the stile, turned to the left along Mr Collison’s ridge field to the corner of Hollingsworth’s Garden....on an elm tree, inclosing (ie including) the whole of the garden and down Fields Orchard....on an elm tree, went between that house and the corner of Hollingsworth House on which....turned to the right along a lane leading to the park (leaving out a cottage on the knoll but taking part of the garden....cross the road leading from Charlton to Madencroft Kiln inclosing a part of the garden at the bath to the footpath going into the park....inclosing the whole of Sluts Green....on a maple pollard, to the left up the river to the mill going through the arch taking the back water from thence up the stream to Bradden’s orchard and close....on an ash pollard at the corner going into the Offley road, the river then being the boundary to Wellhead, cross the river at the road leading to Tatmore Hill and keep it to the corner of a barn belonging to Mr Richard Oakley....then turn to the right across the garden belonging to Wellhead Farm into a field called Eight Acres and keeping straight into an ash pollard, on which......cross Antonys Close (in the occupation of Mr John Brown) to a gate at the bottom of a lane leading to Hillgrove Field....from thence bearing to the right up Hillgrove Field and up to the balk (ie an unploughed piece of land) in Kingwood Hill to the south-east corner of Mount Garrison....then turning to the left along the top of Lower Acre Bottom....at the south corner, then turned into Upper Acre Bottom....then turned through the hedge into Jacks Pieces (marginal note: it was disputed whether part of Jacks Pieces did not belong to Ippollitts)....inclosing the whole of them to Tatmore Hill Lane....

..then kept the lane leading to Preston to a cottage belonging to Mr John Gootheridge in the occupation of John Craft, leaving the cottage on the left hand....and bearing straight to the south corner of an orchard belonging to John Princept Esq. occupied by John Brown keeping that ‘til you come to the corner of a Sward Field of Mr Gootheridge, turn to the right through the hedge....inclosing the whole of John Princept’s land to Pains Field ....then went direct across Pains Field to the rails at the corner of Long Mead....inclosing the whole of Long Mead to an oak tree about 6 or 8 poles from the corner of Pains Field Wood      ....from thence inclining to the right through the hedge into Long Mead and crossing the same to the spot where  willow pollard formerly stood....keeping in a direct line about 2  or 3 poles to the right of the gate at the corner going into the lane (that 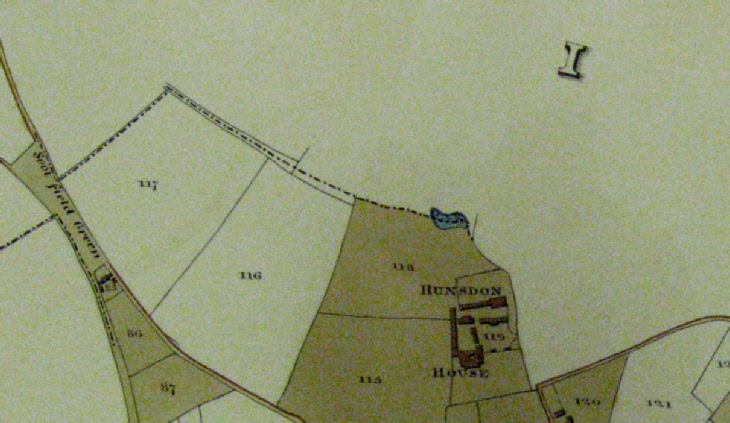 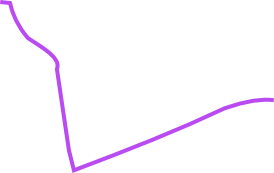 then kept the lane to Tatmore Green....kept the lane to Wayley Green and Sutfield Green....then turn to the left  A and inclose the whole of Mr Hinde’s Further Brade (a field so called) into a lane formerly called South Lane ....continued that lane through a pond  B to the gate of a close (ie field) called (blank) and turned to the right inclosing the Castle, alias Hunsdon House  C, coming straight to the cannon bank...

.....then turn to the left down the lane (that being the boundary) to the Chequers signpost....  D  turn to the left down the road leading to Hitchin as far as the first cottage....turning to the right E into a field called The Park belonging to Temple Dinsley inclosing the same to the corner of the old malting, inclosing the same to an oak pollard, the corner of Dove House Close....from thence to the north-east corner of the brick barn....from thence through the farmyard belonging to Temple Dinsley.... F through a barn into the rickyard....then going by the side of the clipped hedge as far as the stile in Geddens Pasture (a field so called)....going thence in a direct line opposite the middle of Rase Field hedge, cross St Albans Highway G ....and keep straight up the same field to a stile opposite Seven Acres gate....then turn to the left along the lane keeping the same to the London Road....turn to the right inclosing Trunks House, through the hovel leaving the most part of it on the left side....bearing a little to the left across the sward to an elm tree....then inclosing a field called Clerks to a pond....into Stockhole Lane keeping the lane to Stockhole Gap....bearing to the left into Stockhole Field and turn to the right along the bottom of the same and keep along the bottom of the common as far as the first balk, then bear to the left across the balks; turning to the right and go a little to the left of the gate going into Caves Spring....through the spring keeping along the top of Common Shot into the upper corner of Lower Stoney Field....to the road leading to Stevenage, leaving to the right across Stone Field to an ash tree....then bearing a little to the left to an oak pollard....through Stone Field Spring....to the left up Dies Field....to the right about 28 poles (one pole = about five metres)....then bearing to the left by Brummins Wood....inclining to the right under (blank) Wood, through a field called Thirteen Acres, inclosing the whole of it to a lane leading from Dies  to Norton Green....keeping that lane ‘til you come to a green lane leading into Burleigh Fields.... keeping along the bottom to Burleigh Bottom (near the 29 Mile Stone), cross the turnpike road inclosing the whole of Burleigh Bottom Mead....leaving Grafferidge Wood on the left....cross Boughiss Bottom (a field so called....inclosing Langley Hill, inclosing the whole of Sutt Wood, inclosing Brewers Hill, inclosing Lamast Wood to Lay Field....inclosing Queash wood, inclosing the ten acres belonging to Hill End Farm....and the whole of Hill End Grounds to the top of Hitch Wood to St Albans Highway....crossing the road into Further Bushey Field belonging to Temple Dinsley, the whole of which we inclosed and kept the foot path to the south corner of Further Burry Field..