I have many memories of Langley End. I attach a photo which I took circa 1970 (above). The impressive dovecote was not in the garden but on a lower level beyond the garden wall. My grandfather garaged his cars in the barn just west of the Cottage, most memorably a large Humber. He said Lutyens designed the Cottage as the servants hall for Hill End House. It comprised mostly small rooms probably intended as bedrooms, a very large kitchen with an adjoining scullery and a substantial, walk-in pantry. There was a modern [for then] bathroom beyond the kitchen. My grandfather had a bedroom on the ground floor and his cook/housekeeper, known to everyone as ‘Ben’, had a room upstairs. A rather grand sitting room occupied the southern end of the ground floor. The small room on the ground floor overlooking the garden had a wireless, a gramophone and a pre-war television which received broadcasts from Alexandra Palace when the BBC recommenced transmissions in 1946. A photo of me at the wheel of my uncle’s MG (below) was taken outside the Cottage at around that time and is attached. 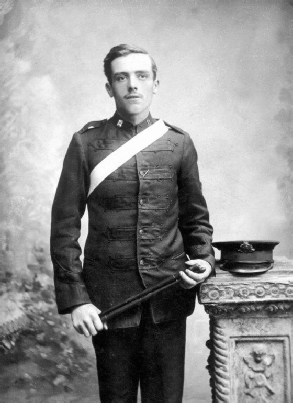 Gareth Gunning writes: My grandfather - Samuel (Sam)Thomas Gunning (1886-1981) lived in Langley End Cottage from the late 1940s until the middle 1970s. He was son of a Bristol builder and served with the Leicestershire Regiment during WW1.

When he retired, he was the Public Health Officer for Hitchin Rural District. When first appointed, he was Inspector of Nuisances.

The photo of Sam Gunning in uniform (right) is undated but is probably very early 20th Century. I have his drumsticks. His distinctive Bristol accent persisted until he died.

I am not sure why it was to Langley End he moved after separating from his wife, who continued to live in the family home in Norton Road, Letchworth, but he and the Puxleys were always on very friendly terms.

I have been told my grandfather was a member the War Agricultural Committee during the 1940s. He and Mr Puxley might have worked together there. The historian Reginald Hine (1883-1949) was also a friend. I have suspected a grace-and-favour tenancy. 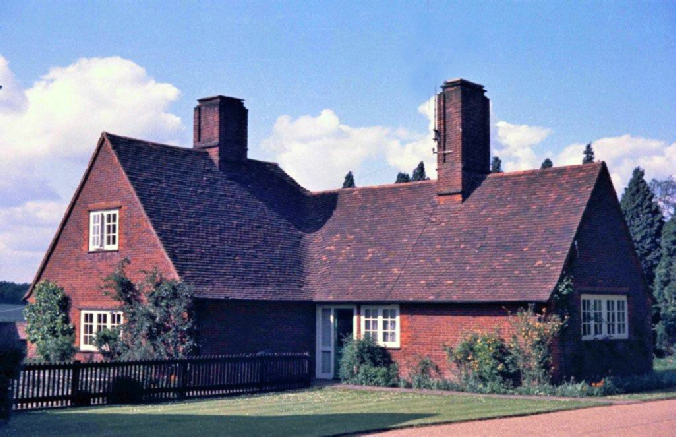 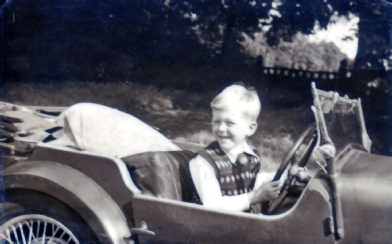 Childhood walks to the Minsden Chapel’s ruins, walks through Hitch Wood’s bluebells and cows being milked by hand in the dairy at the farm are all clear memories. In the middle 1950s, my father paid a small sum for an old Rover used on Hill End Farm as a utility vehicle, largely because Sam Gunning thought the car historically interesting and worth better.

After some restoration, it became the family car here in Chelmsford and, until it finally expired in a clatter of broken engine valve mechanism, returned to Langley End whenever we visited the Cottage.

Stanley Gunning was an architect and an alumnus of Hitchin Grammar School. Rosa was my mother (1913-2013), a Letchworth girl who my father married in 1936. They lived in Letchworth before moving to Chelmsford in 1948. 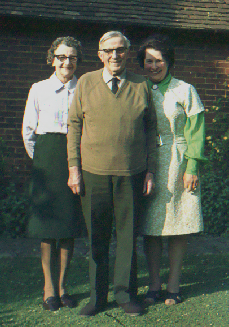 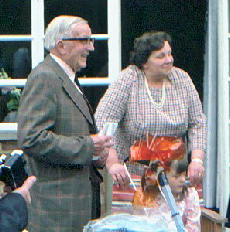 I last visited Langley End in 1992, parking in the new Hitch Wood car park and walking up the steep lane to look at the Cottage.

From the outside, apart from position of the garden fence, it seemed little altered. Although sub-divided, Hill End House looked as I remembered it too. It seemed incredible that vehicles had used the unmade lane quite ordinarily in summer all those years ago.

I have found a photo of Sam enjoying a joke during his 90th birthday party (below right). He had asked for a small electric lawnmower, the handle of which is just visible in the picture. The lady is his daughter: Muriel Dillaway (1917-1992).

The main change to Langley End Cottage since the 1970s seems to be incorporation into the curtilage of the dovecote and land on the lower level between it and the cottage. Previously, the garden comprised only the area between the cottage and the barn together with the open, always immaculate, front lawn.

Internally, the changes have been amalgamation of some small rooms to make larger ones. The pantry has become a utility room and the bathroom, which used to be reached via the kitchen, is now off the room defined in these particulars as the master bedroom. Ithere was a huge table in the kitchen which would have easily seated ten people. If Sam Gunning was right about the design, I guess it was planned for seven residents. The south room, ie the sitting room (1940s to 1970s and also now), might have been originally for the senior servant – perhaps the butler. If the building was ever a gardener’s cottage, the gardener must have been most highly prized to warrant such accommodation.

I am grateful to have the benefit of your researches into the Fenwick’s period at Temple Dinsley proving that Lutyens did design the buildings at Langley End (Link: Langley End Cottage). My assertions to this effect, repeating Sam Gunning’s confident account, have been challenged by people who say I must mean Temple Dinsley. As you probably know, the Lutyens catalogue (http://www.lutyenstrust.org.uk/about-lutyens/#) omits his work at Hill End. Had I searched the listed building descriptions I would have found confirmation but I didn’t think to do so before reading your account.

My father claimed a remote association with the Lutyens practice because, as an articled pupil, he had drawn plans for a house in New Delhi; work on it having been sub-contracted to the firm of Hitchin architects [S. B. Russell] in which he first entered the profession. Via my father, I inherited some of Reginald Hine’s publications. One of my copies of “Hitchin Worthies” has the inscription: “to my friend Samuel T. Gunning”. Under Hine’s signature, and obviously in his handwriting, is a boast of how important the book is. Could such vulgarity have been some private joke between them? Inside I found a copy of the programme for unveiling the Hine memorial tablet in 1952 and a small photograph of what is almost certainly the stone on Hine’s grave. 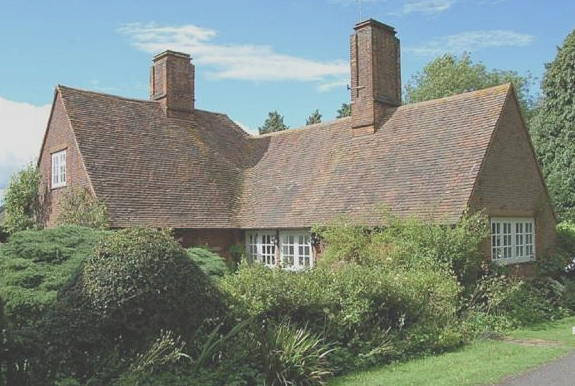 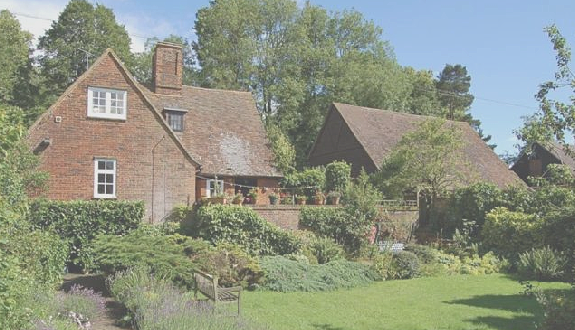 The dovecote is an interesting case. Historic England’s listed buildings account refers to Lutyens saving it, together with the surviving barn, as ornaments in the Hill End House ensemble when that replaced Hill End Farm. The sequence of Ordnance Survey 1:10,560 maps 1899 – 1924 – 1948 – 1950 clearly shows removal of the farm from the Hill End House site to its new location along the lane in a north easterly direction. However, at that scale, it isn’t possible to distinguish the dovecot from other buildings in 1899. Inspection of the OS 1:2,500 map for 1898 suggests the dovecote was either part of, or perhaps attached to, a larger building which was demolished during clearance of the original farmstead. I think we can be reasonably sure it wasn’t a free standing building pre-Lutyens. I am tempted to suggest he might have ‘Tudored it’.

Another interesting conclusion from the cartography is that the building you identify as the current farmhouse (Link: Hill End) appeared between 1948 and 1950. I have no recollection of it under construction although old enough then to have noticed. New house building was still a novelty so soon after the war and mostly confined to either New Towns like Stevenage or completion of works abandoned in 1939. However, it is entirely possible we didn’t visit my grandfather during that period which coincided with our move from Letchworth to Chelmsford. He quite often came to see us.

Which of the buildings on the 1924 and 1948 maps was the farmhouse from 1911 to 1950? The house next to the farmyard was present in 1924 and must be the prime candidate. In the right place but why not in brickwork to match the other Langley End buildings? The chimneys are not part of the set either. This ‘Farm two’ in my attachments looks today like so many houses in Letchworth which had the render to cover very ugly local bricks. Lutyens specified lovely bricks for the Hill End House ensemble. Perhaps the render on both farm houses came later but I doubt the bricks used in 1949 would have been anything like those chosen by Lutyens. That there were two farmhouses after 1950 might indicate two generations of Rex in residence, perhaps?

The white gate posts pictured between the farm and Langley End Cottage evoke many memories. I don’t think the gate was ever closed, even if there was one. The route through and down the hill to Hitch Wood was a highway open to traffic and the Ordnance Survey’s current mapping suggests it probably remains one.

Gareth Gunning has sent several illuminating emails together with photographs about

Langley End Cottage and his family’s association with it.

I am grateful for his approval to include his thoughts here.