Christopher John Sansom was born on 9 November 1945 at Boreham Wood, Hertfordshire. He was the first-born son of John Gordon and Doreen Mabel (nee Gold) Sansom who had married after John had returned from the Middle East in November, 1944 after serving in the Territorial Army during World War Two. John then

re-enlisted in the Army. 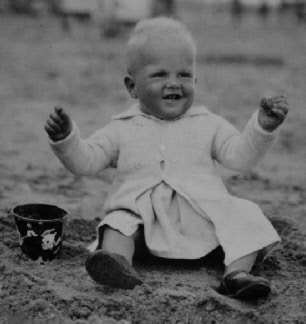 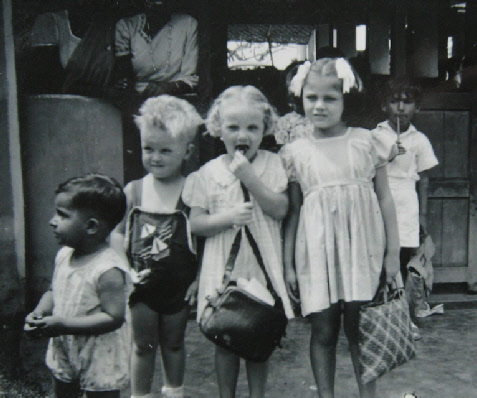 John was posted abroad. Doreen and Christopher lived in Colchester Army Barracks until 30 January 1948 when they boarded the troop ship, SS Dilwara, at Southampton and sailed to Colombo, capital of what is now Sri Lanka to join John. There, in 1948, a second son, Mark, was born. As an infant, Christopher attended Montessori School in Colombo (pictured below).

The family returned to England in 1950 when they lived initially with Doreen’s parents. They later moved to

21 Broughinge Road, Boreham Wood. Christopher was a pupil at Furzehill and then Cowley Hill Primary Schools. After passing the 11 Plus examination, Christopher attended Boreham Wood Grammar School where he was Head Boy. He studied History, German and Latin to ‘A’ and Scholarship levels and was a talented middle-distance runner. 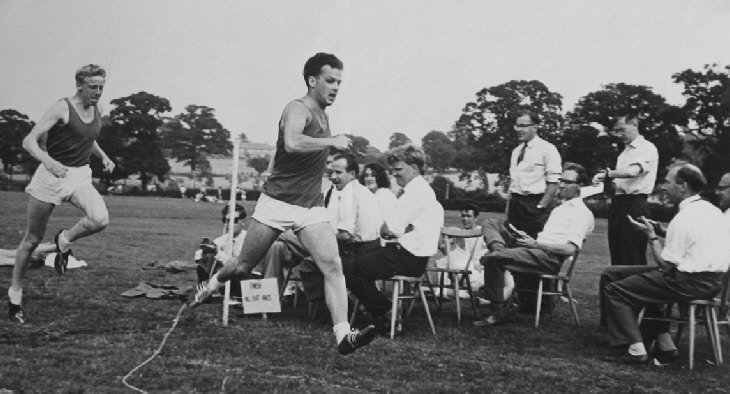 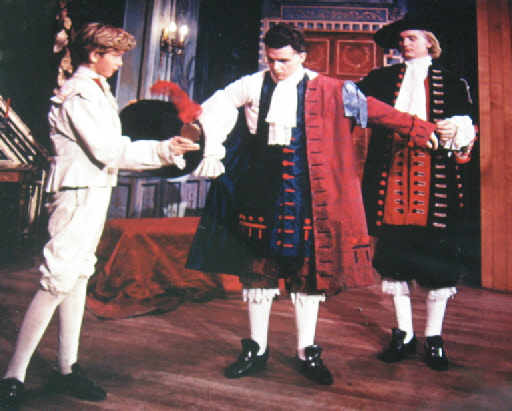 Christopher chose to study Latin at school because he was determined to go to Cambridge University. This ambition was kindled partly because of the influence of his Headmaster who had graduated there and partly because of his favourable impression of the University after a visit. He read Archaeology and Anthropology at Peterhouse College.

His interest in archaeology had been fired by BBC radio programmes. In his mid-teens, he joined digs at St Albans Abbey and Winchester Cathedral. The photograph below is of Christopher searching for fossils at the Jurassic Coast, Dorset. 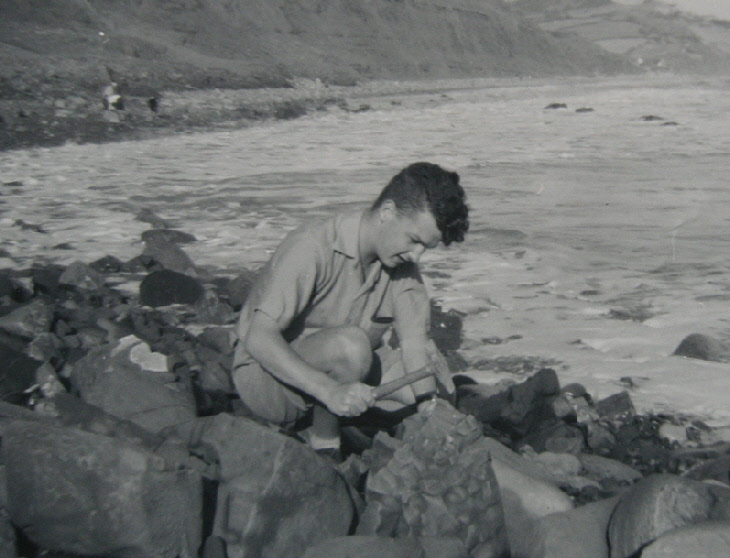 While at Cambridge, Christopher, a tenor, was an enthusiastic member of choral groups and the Peterhouse Chapel Choir. He left Peterhouse College when he was twenty-two years old with BA and MA degrees. 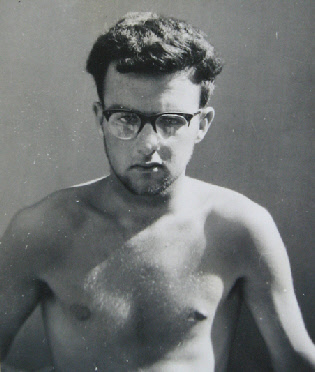 Significantly, noted below this photograph is a comment from A Bowley’s The Natural Development of the Child: Collecting - ‘Sometimes this interest constitutes a passing phase while sometimes it persists or revives and may be the foundation of an adolescent or adult hobby’.

After completing the teacher training course, Christopher taught history until 1984 at Glossop School, Derbyshire where he became Head of Humanities. While at Glossop, Christopher married Audrey Wickens at Buxton, Derbyshire in the summer of 1979 – a marriage which was to last for around ten years until they drifted apart and divorced. 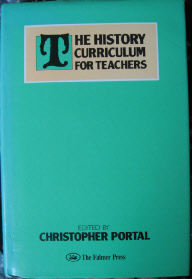 Christopher then enrolled at Alsager (Teacher) Training College near Stoke on Trent with the intention of teaching history. During this time, he and Anna divorced ‘amicably’ – they ‘discovered that it wasn’t really going to work out’.

Christopher retired early and became interested in computer database software development for charitable organisations. In the early 1990s, he moved in with his parents, who were now living in Old School Bungalow, School Lane, Preston.

His  days were spent cycling; walking the River Hiz; counting bats and wild flowers; dating the age of hedgerows from the species of plants and trees found and singing with the North Herts Guild of Singers. He also joined the choir at All Saints, St Pauls Walden and conducted choirs around Hitchin. He thought music was for the glory of God. Christopher also decided that ‘it would be a good idea to get a job’ and worked in the Education Office at Letchworth as an assistant in the Educational Psychology Department.

In 1999, he wrote an unpublished paper which researched a Knights Templar house at the nearby village of Charlton. The following year, together with Gilbert Burleigh, Joseph Elders and Adrian Havercroft, Christopher was part of the Temple Dinsley Archaeological Project. An appendix to the subsequent report, The Templars, Baliols and Hitchin, was dedicated to his memory.

As a person, Christopher was ‘distant, scholarly and absorbed in music’. He was ‘solemn and never loving and affectionate – he was not ‘a hugger’. His mother added that he ‘showed his affection in unexpected ways’. If she was ‘stuck’ on the Daily Telegraph crossword, he would say, ‘Would you like me to do that, Mother?’.

Following a musical concert at Benslow, Hitchin in 2000, Christopher returned home and collapsed on his bed with a seizure. He was taken to Lister Hospital at Hitchin where an inoperable brain tumour was diagnosed. He was confined to a wheelchair. While spending Xmas with his brother, he collapsed again. He passed away in 2001 and his ashes were laid in St Martin’s Churchyard, Preston on 16 June.

A villager remembers him thus: ‘Christopher was a very competent chap. He could have read Music at Cambridge. He sang, played and was a Choirmaster at All Saints, St Pauls Walden. He was interested in natural history and single-handedly conducted bat surveys in the parish. He was concerned also with the state of the mighty little rivers, Hiz, Purwell and Oughton and sought to form a new 'Three Rivers Society' to look at their catchment areas. He researched the medieval agricultural systems of the Knights Templar. Christopher gave us several rather long but fascinating and detailed lectures in Preston Village Hall - no slides; just facts and enthusiasm!  We did some 'field walking' together around Minsden which produced no great discoveries.  His brain tumour and early death were a tragedy. We would all have learned much more from him.’

The memorial to Christopher in St Martin’s Church, Preston

In Highways and Byways in Hertfordshire (1913), Herbert W Tompkins describes a discovery at Temple Dinsley: ‘Leaving the village green, I obtained entrance to the private gardens of Temple Dinsley and here lying upon the ground near the house in a spot shaded by pines an guarded by an effigy of Father Time with his scythe and hour-glass (located in the rose garden) is a large stone coffin lid which was found by some workmen when digging in the grounds...on that lid is a filial cross upon a rod or staff with a central disc and floriated extremes...this specific pattern was, I know, among the insignia of the Knights Templar...these discoveries have set the villagers talking’

The coffin lid was deposited in St Martin’s Church and a use for it was often discussed at church annual meetings. In 1951, it was kept ‘behind the altar’ and it was suggested that it be moved to ‘a more convenient place’. A further comment was that its ‘appearance would be improved by a coat of paint’. Sixteen years later, it was still laying, unpainted, ‘in the storage room behind the altar’ and there was a move to bring ‘it out into the church and shown in a suitable way’. In 1992, it was in the south-east corner of St Martin’s nave.

The slab is of light grey Purbeck marble. The upper face is bevelled; the underside is flat; and the edges have been chamfered although there is a little damage here. The foot of the stone is missing and the underside is broken and only half of its original thickness remains along the bottom third of the slab. There is also a simpler cross on the underside of the slab.

The slab probably dates from the second quarter of the thirteenth century. Its cross stem is slender and sharply carved (which is typical for an artefact associated with a Templar Preceptor as it symbolizes his staff of office). The disc at the centre of the cross may represent the head of the staff. So it is likely that this is the lid of the tomb of a Preceptor who died in the early thirteenth century.

Following Christopher’s death, Doreen Sansom arranged for the slab to be mounted in a oak frame which allowed both sides to be viewed as a fitting memorial to her son in the church. 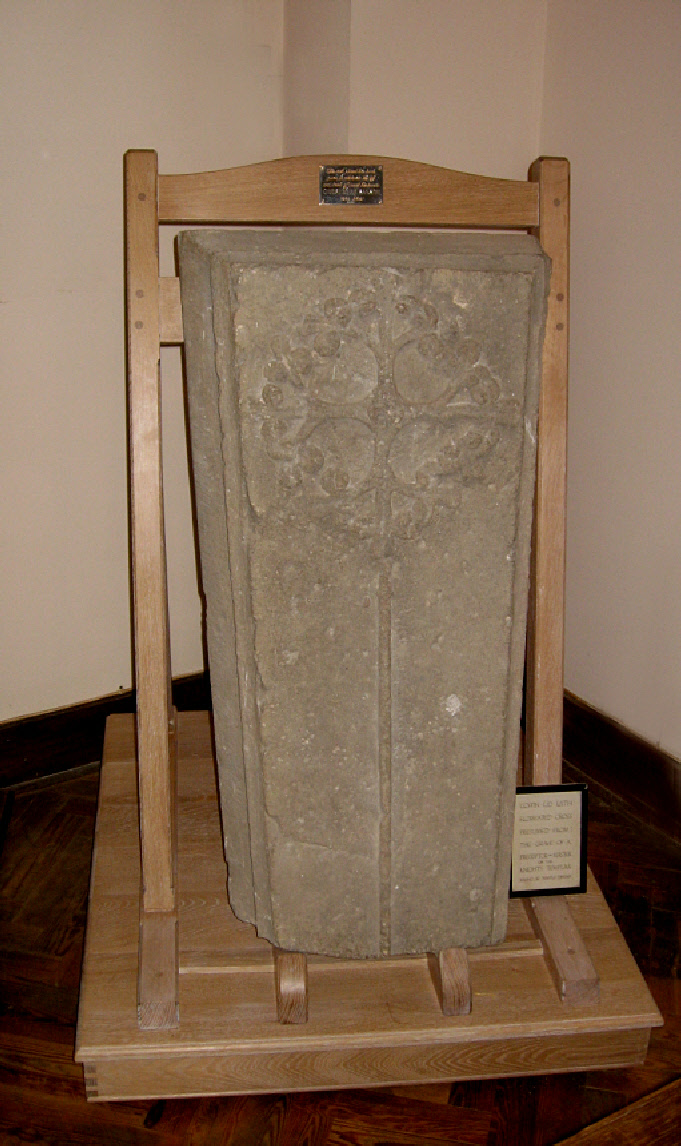 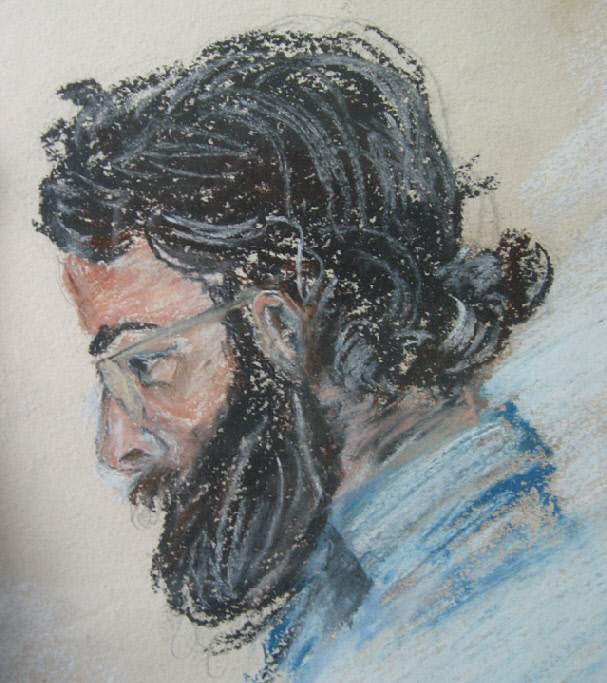 Christopher then enrolled at Edinburgh University for three years to study for a doctorate in the Department of Educational Studies. However, he didn’t finish the course as ‘he couldn’t prove what he was set on’. While there, he met Anna Georgina Chitty with whom he sang as a member of the Edinburgh Renaissance Singers. Christopher was also a director of the choir and sang at the Edinburgh Anglican church during Daily Service and on Sundays as a lay clerk. His consuming musical interest may have diverted his attention from his studies. Christopher and Anna married on 27 September 1969 at the bride’s local church, St Gwynhoedl, Llangwnnadl, North Wales.

After a time at Hale in Greater Manchester, the couple moved south to New Romney on the Kent coast where Christopher was again Head of Humanities, but now at Southlands School. He was also the history adjudicator on the North Kent History Committee.

Evidently continuing his interest in the theory of teaching history which he showed at Edinburgh University  Christopher produced two written pieces in the late 1980s. The first article, produced in 1985, was a survey of recent research into the history syllabus and its implications for teachers. Then, in March 1987, he contributed a chapter to the book, The History Curriculum for Teachers (right), in which he reviewed how children understood history and the concept of time, evidence and change.