Because of these circumstances, a local study of Preston can present a challenge. What area should be described as ‘Preston’? Some of the records for one parish exist and for another have been lost, so that an incomplete picture of the village is given for a specific time. Thus, there were ‘censuses’ of Preston taken in 1801 and 1821 which appear to include only those villagers living in Hitchin parish.

In compiling records of the births, marriages and deaths of villagers, the records of at least three parishes must be consulted - and the non-conformist tradition in the area also resulted in these events being conducted in places of worship other than the main parish church. In short, because of these difficulties, some of the information contained on this site is a ‘best estimate’ of the situation rather than an accurate synopsis.

Preston Hill Farm and its cottage(s) were in Kings Walden parish. So, if my hurdle-making grandfather (who lived on the north side of Chequers lane for a time) went to work in the woods to the north of Temple Dinsley - a distance of less than a mile - he would pass through three parishes.

The village of Preston was within the jurisdiction of the manor of Temple Dinsley. A short distance to the west lay the manor of Missenden (Minsden). To the north was, Maidencroft. These manors exercised influence over property transactions in the Preston area throughout the nineteenth century. Indeed, Thomas Harwood Darton described himself as ‘Lord of the Manor’ as late as the census of 1881.

The manor was governed by  manorial courts which included the Court Baron. In the late 1800s, the Court Baron of Temple Dinsley met periodically at the Chequers Inn. Its main function was to regulate the transfer of property among the manor’s tenants  - a process similar to the reassignment of council houses.

The new tenant of the property was given a copy of the their entry in the rolls of the court - a system which was called copyhold. Today, we are more aware of freehold and leasehold agreements because the copyhold system was abolished by Act of Parliament in 1924 - and so the Court  became redundant. The complete court rolls for the manor of Temple Dinsley in the nineteenth century have survived. These record all the transactions of local property being sold, mortgaged and inherited - a wonderful historical resource.

Parishes did not occupy the same area as manors.The parishes were an important part of the villagers’ everyday life in the nineteenth century.  Because their parish officers collected and then administered monies for the relief of the poor, they controlled who lived in the parish and who was therefore eligible for help.

This system was monitored by Act of Parliament. The officers decided who were ‘settled’ or remained in their parish and who should be ‘removed’ to another parish. Their decisions (which could be appealed) were then implemented by the parish constable.

The church was at the centre of the parish. Tithes were levied from around 1840 to pay for the upkeep of the church and the expenses of its priest. The resulting Tithe Map and Award are important research sources. The priest was responsible for the recording of births,  marriages and deaths in the parish registers.

It is from the surviving records of the parishes that we glean information about the local community. There are lists of those paying taxes and receiving aid; there are Settlement and Removal Orders; there are lists of those paying tithes; there are records of births, marriages and deaths which may include additional information of occupations and abodes - and much more. The contents of the parish chest are an ‘Aladdin’s Cave’ for the local historian.

However, Preston is a curious and difficult study with regard to parish records. This is because it had no parish church of its own and the district which was known as ‘Preston’ was administered by three separate parishes - Hitchin, Ippollitts and Kings Walden. The Temple Dinsley Manorial Roll describes transactions of some properties attached to Preston Hill Farm as relating to ‘Preston in the parish of Kings Walden’.

Below are two maps showing the boundaries between the parishes. 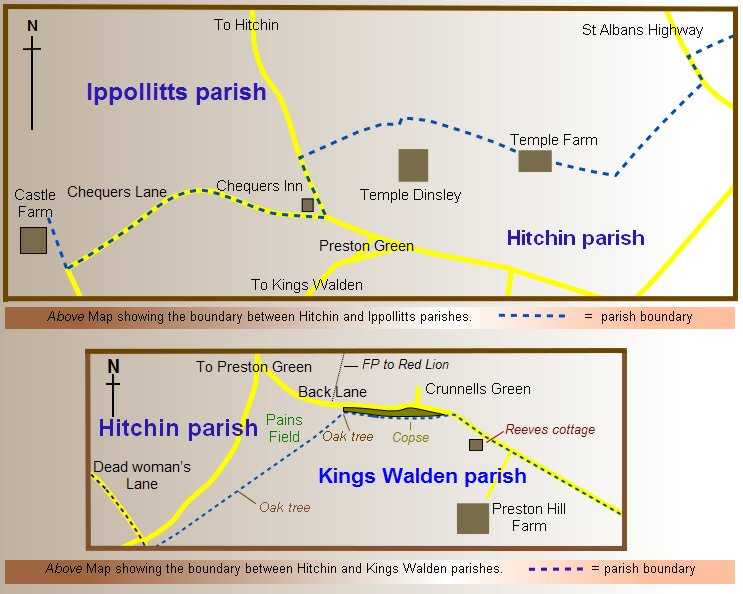