Robert Hinde was born at Chertsey Abbey, Surrey in 1720/1. On his paternal side, his ancestors included Scottish and English kings as far back as Alfred the Great. The pedigree of his mother’s family included the Emperor Charlemagne and one of her ancestors was an attendant of William the Conqueror.

Robert’s family, although steeped in military tradition, had purchased a brewery at Holborn, London to bolster finances. From the profits of this venture, Robert’s father bought Hunsdon House at Preston. This mansion had been built on the site of Preston Castle which dated from around the tenth century. It was rumoured that a battle had been fought in the area ‘in early times’ and that one of the protagonists had been based at Preston Castle.

Unsurprisingly, in view of Robert’s military forefathers, he joined the army in 1751 and was appointed as Ensign in the Eleventh Foot. Three years later, he was promoted to the rank of Sub-brigadier and Cornet in the Second Horse Guards.

During a lull in campaigns, Robert married Mary Ball who was the daughter of the Governor of Jersey. The

couple had seventeen children including sets of twins.

After his parent’s deaths in the early 1750s, Robert inherited Hunsdon House and embarked on a programme

of bizarre additions to the property. ‘He converted the appearance of the house into that of a castle (from which

it derives its present name Preston Castle) by making turrets, embattlements, port holes, port cullises etc. He raised a small battery of seven guns on the right hand-side of the entrance to the House and planted a larger

gun in front of the same, all of which used to be fired on particular rejoicing days. He also erected a building, which he called a gazebo, in one of his fields called Mount Garrison’. ‘In the garden adjoining he raised his earthworks, dug his trenches and built his mimic fortifications’. (1) 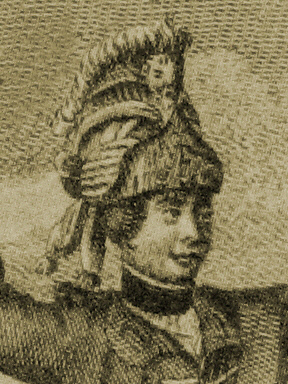 I have something in common with Robert Hinde who lived at Preston Castle in the eighteenth century. He was descended from kings of England. It is not this heritage that we share, but rather a common birthday, 12 January. 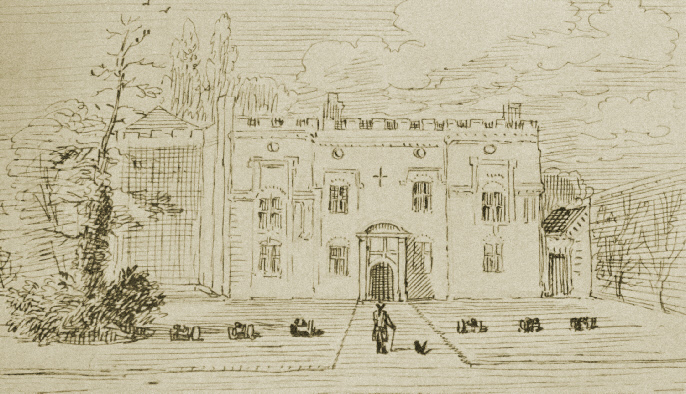 Preston Castle - copied from a sketch by Samuel Lucas

If these modifications were insufficient to raise the eyebrows of Preston’s labourers, Robert also began

behaving eccentrically – ‘On the anniversary of the King’s birthday and of famous battles, he mounted his

servant (Samuel Pilgrim*) on horseback and made him ride through Hitchin trumpeting as he went, stopping occasionally to proclaim, like a herald of old, the event for which the day was famous’. (2) This odd behaviour escalated. Robert later dressed in full uniform and decorations and rode to Hitchin’s market place with his retainers to announce important anniversaries in English heritage. There was a fanfare, an address and the national anthem was sung after which entertainment the entourage beat a retreat to Preston Castle.

After playing soldiers, in 1756 Robert was no doubt delighted to experience the real McCoy when he fought in

the Seven Years War as Brigadier and Lieutenant in the Light Cavalry. He was again promoted and finished the campaign as Captain Hinde. Intrigued (perhaps obsessed) as he was with the tactics of war, after his

retirement in 1763 Robert wrote, ‘The Discipline of the Light Horse’ which was a history of his regiment.

Robert returned to Preston Castle on half-pay. But his make-believe soldiering continued. His ‘army’ included

his growing progeny, and the eight children of Mary Taylor who lived at Hitchin Hill. These were decked-out in a scarlet uniform, blue sash and black beaver hat and called Robert, ‘General’.

He now applied himself to farming – yet his military training asserted itself even in this pursuit. When he summoned and dismissed his labourers, it was proclaimed by a chorus from his Light-Horse bugle. However,

he took his farming seriously – ‘I pursue the following method: wheat after the fallow, then peas, turnips, barley, oats, clover, wheat’. He suggested improvements to Arthur Young’s swing-plough and trialled the Hertfordshire great-wheel plough and the one-handle Essex plough.

of local roads (Link: Preston Highways). His attention to detail and egotism drove him to correct an entry of the birth of one of his children in the Hitchin parish register. He added ‘Esquire’ to the record and noted his rank

and regiment. It must have been galling to such a man to find that half-pay did not adequately cover his

expenses – and especially the demands of his children. He sometimes rode to London in attempts to have the £132.0s.51/2d paid early.

the day of the funeral, Pilgrim fired a salute and sounded the ‘Last Post’ from the gazebo. Then the last Hinde military procession, resplendent in its heraldry and plumes, wound its way through the Preston lanes to

Robert was laid to rest with his parents inside St Mary, but even here he attracted attention – the

churchwardens objected to the verse on his grave and his Coat of Arms was prone to trip worshippers. Both

the verse and the indentation have been eroded.

What became of Preston Castle? Robert’s children moved to Hitchin Hill and the mansion quickly became abandoned. On 8 May 1832, there was an advertisement to let Preston Castle which provided a glimpse of its features:

The approach, past a neat entrance lodge, was by a gravelled road through a meadow. There were four bedrooms and a large bedroom for servants on the upper floor of the mansion. On the first floor were three spacious apartments opening into a gallery, dressing room, water closet, three other bedrooms, apple room and staircases. The ground floor had a drawing room (30’ x 20’), a dining room (20’ x 18’), a billiard room, kitchen, pantry, servants’ hall, wash-house and dairy. There were also wine and beer cellars.

The outbuildings included a double coach house, five-stall stable over which was a granary and a loft, a coal house and wood barn. There was a 23-feet long greenhouse adjoining the breakfast room, a 20-feet long grapery and a mushroom house. The grounds occupied four and a half acres,(including the Wilderness) which were thickly studded with lofty firs, chestnut and lime trees. There was a well planted orchard and garden and walks ornamented with evergreens, American and other flowering shrubs.

A visitor to Preston Castle in the 1850s observed that it was ‘standing forsaken and dilapidated in the midst of its still beautiful gardens. A narrow lane running south from Preston led you to a simple lodge. You then passed over the meadows, well-fenced with hawthorn and holly to the north part of the house. Over a low strong hedge of sweetbriar, you saw a massive grey porch, a little overhung with Virginia creeper; venerable casements looking out onto the broad carriage road which led to the hall-door and a circle of flower beds with a central sundial. Well do I remember those grounds and the woods of pines and chestnuts at the end of them. In the gardens one saw everywhere a happy blending of modern art with the dear old stately formality of other days.

‘Inside the mansion, all was silent and forsaken. One’s footsteps echoed strangely and the midday sun, passing into the rooms through an outer blind of sweet roses, starry jasmine and climbing creepers, could not lighten the gloom within. The sight of the mildewed walls, the faded, falling papers, the blank deserted hearth would have saddened any heart...’ (3)

The mansion was eventually sold to William Mellish a few years later and sold off as building material. The battery of guns became scrap metal (except two which found their way to Preston Hill Farm); the gazebo was used to repair a Kings Walden pigsty; the lawn reverted to pasture. Even the avenue of walnut trees, which led from Chequers Lane to Castle Farm, are no more. The lodge was destroyed by fire in 1912. Only the name remains – ‘Castle Farm’ – which adorns a nearby farm. There is also a three-hundred-feet deep well which is thought to be the original well of Preston Castle.

With Hinde-sight, Robert was a colourful, quirky character who no doubt enlivened many a conversation of Preston villagers and Hitchin spectators. His eccentricity resulted in a literary everlasting memorial – he was the model on which ‘Uncle Toby’ was based in Laurence Sterne’s novel, ‘Tristram Shandy’.