A letter to The Times dated 10 April 1975 from the incumbent headmaster of Princess Helena College (PHC), Donald Clarke, will suffice to introduce our subject.

Dr Clarke, evidently irked that two other colleges had boasted they had pioneered academic education for girls in around 1850, issued this robust rebuttal: ‘The Princess Helena College was founded in 1820, originally occupying premises at St Andrew’s Place on the west side of Regent’s Park (London) and it has long claimed the above distinction.

‘A wide curriculum was followed. The girls were taught to be “mistress of the English language and Arithmetic; to write and read French grammatically; to be well grounded in Sacred and Profane History, Chronology, Ancient and Modern Geography and the use of the Globes; perfect in the Rudiment of Drawing and the Theory of Music”. Italian and landscape were also referred to as subjects but the girls did not learn Latin until 1841.

‘As the original purpose of the school, which it successfully fulfilled, was to equip girls to be governesses and teachers, I wonder whether it might also claim to have been the first teachers’ training college’.

One suspects large sections of Dr Clarke’s original letter may have languished in the Editor’s waste bin – he wrote a 300-plus-page book about PHC, The Daisy in the Broom (The Story of a School 1820-1958).

The ‘Adult Orphan Institution’ that was to become PHC was established at 32-33 Mornington Crescent, Hampstead. While having a wide syllabus, it had a narrow uptake of daughters of ‘deceased Anglican Clergy and of Naval and Military Officers who had perished in the Napoleonic Wars.’ The students attended from the age of fourteen until their majority.

As time ticked by, the pool of potential scholars understandably shrank but the Crimean War provided a silver lining for PHC as its consequences widened the College’s catchment potential. PHC also began to accept daughters of East India Company officials.

It was in 1875 that Queen Victoria’s third daughter, Princess Helena gave the school its title and PHC became a Public School. As a result, numbers gratifyingly swelled and a new, West London home was found for the college at Eaton Rise, Ealing.

However, privacy became an increasing issue as London sprawled and the relative remoteness of Temple Dinsley at Preston was alluringly attractive.....

This article focuses on the easy relationship between PHC and Preston. My impression is that for decades the College has deliberately integrated with the village, has provided considerable local employment (occasionally advertising positions in Preston’s Parish Newsletter) and has allowed Preston folk to enjoy some of its facilities. The safety of the girls is clearly a priority – on my only visit, I was pleasantly monitored and when taking photographs, it was understood no students were to be included.

It is intriguing to wonder how Preston reacted to the notion of an upper-class girls College on its doorstep in 1935. The villagers had co-existed apprehensively with the previous owner of the mansion, the Countess of Carnarvon, refusing point-blank (from squeamishness or superstition) to help unwrap mummies recovered from the pyramids. They had also seen a steady turnover of Lords of the Manor (four) since 1901.

From the new headmistress, Vyvyen Prain’s, perspective, there was the preoccupation of how many pupils could be enticed to Hertfordshire’s seclusion – that, and would the mansion be ready for them?

When she arrived, the house was full of noise and dust; she had no hot water or electric light and eight short weeks to lick the house into shape. She banked on prospective parents seeing ‘the advantages’ Temple Dinsley had to offer.

The upstairs was converted into dormitories, kitchen and dining rooms were installed and in the following year the west wing roof was cranked up to provide still more accommodation. An art studio and music wing followed – the total cost of purchase and renovation being £48,712.Yet, when war was declared, the move seemed most providential.

In the winter of 1935/36, ‘with a Christmas-card effect, the sun shone on a white landscape as we walked through the garden to the little church just beyond the gates – a church as white and simple as one always expects a village church to be’, wrote Miss Prain. St Martin’s was to be probably the main point of contact between Preston and PHC.

When the renovations had been completed, the mansion was rejuvenated. White paint was stripped to the bare wood below and the lily pond became a swimming pool. However, Gertrude Jekyll could otherwise relax – her outdoor creations survived mostly intact - of necessity, possibly, as these were among the Unique Selling Points for interested parents. In 1938, there were more than a hundred students aged from 11 to 18 at PHC.

At morning break, the village baker arrived with a delivery of fresh hot currant buns, eagerly swallowed with cocoa or orange juice, depending on the weather. 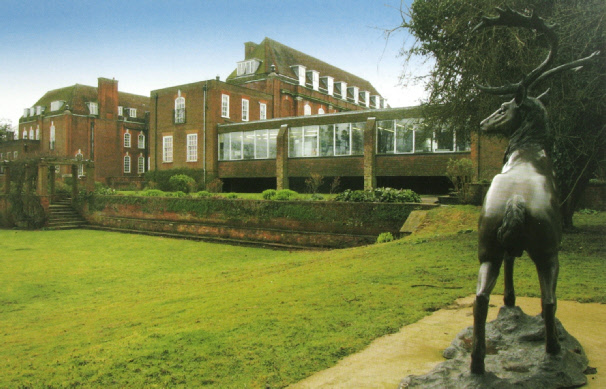 Recent collaborations between PHC and Preston

I began this article with a quote from a PHC Headmaster – I will end with another, to highlight the ties between the village and the College. When Anne Marie Hodgkiss (shown right) left PHC in 2008 after eleven years, she wrote, I have ‘enjoyed being part of the very special community of Preston...I have always been made to feel welcome at village events’. Writing of St Martin’s and the Preston Parish Council, she added, ‘I have especially enjoyed PHC links with both.’

The facilities at the College have also been used by Preston Swimming Club in summertime. Additionally, in 2008, the feasibility of another cricket pitch in the grounds of PHC to be used by Preston teams and a PHC girls’ team was mooted. This project is still being pursued.

When Hitler turned his menacing attention westwards, Preston was declared, ‘safe’ but the Tudor cellars of PHC were nevertheless swept, whitewashed and pressed into service as bomb shelters. The gardeners roofed over a chalk pit in a nearby wood. This was stocked with tinned food and christened, ‘Hitler’s Hall’. Three bombs, two of which were duds fell on local fields as well as the odd German plane and three V1 rockets.

Preston was temporary digs for evacuees and some were boarded in the art studio. Included among the nomads were nurses from a bombed London hospital, overseas airmen, children of French resistance fighters and lucky lads from Watford Grammar School (with holes in trousers and socks) who were employed to harvest crops on nearby farms.

Even the young ladies of PHC pitched into the defence of the realm, weeding-out charlock and thistles in the fields and tending the cottage garden. In the autumn, they were driven out to farms on lorries to dig potatoes.

The school was untouched by Germans, but marauding Canadian soldiers appropriated a lead gazelle - one of two that were perched upon the main gate pillars. (The drive was known as ‘Gazelle Drive’.) Its partner was rescued and re-located by the Arches Pool until it too was stolen in 1989.

In 1942, Temple Dinsley was almost requisitioned to serve as part of the war effort. One of childhood’s great enemies, measles, came to the rescue so that only The Lodge was taken, along with land near the games field which was filled with mobile guns and army vehicles. Soldiers entertained the girls with gun drill; girls entertained the men with lacrosse and tennis.

After peace broke out, in 1947, Princess Helena died. She was succeeded as President by the Duchess of Gloucester who visited PHC in 1952. Eight years later, in 1958, Miss Prain left (and was replaced by Miss C J Stratford) and she died in 1983. She was remembered at a memorial service at St Martin’s. Miss Stratford was replaced by Dr Clarke in 1971. (Dr Clarke died at Edinburgh in November 2010)

To illustrate the close relationship between PHC and the village, circa 1970, Mrs Maybrick arranged for some new hassocks for St Martin’s to be stitched and made-up. Volunteers included villagers and pupils of PHC.